Apple is getting ready to debut some new tablets, and the Apple Store is down in advance of the October 16 Apple Keynote. The Apple Store will be back up shortly after the Keynote ends.

It's that time again…  pic.twitter.com/4rcR4cambr

As usual, Apple will be livestreaming their new product launch from California, and you can watch the big reveal right from your own home or office. Here’s a guide on the various ways you can watch the livestream of Apple’s keynote event for the new iPad line. If the rumor mill is any indication, we’ll be seeing at least two new iPads at the October 16 event. We may also see new iMacs and get some more details about OS X Yosemite. The event will be hosted at the Town Hall auditorium on the company’s Cupertino campus. Read on to see all your options for watching this iPad launch unfold in real time.

Want to see all our Apple coverage in one place? Visit our Apple news tag page.

Click here to visit Apple’s Live event website, where you can watch the keynote speech. The keynote begins at 10 a.m. PDT on October 16. The stream should begin automatically.

Just last month, Apple held a similar launch event to usher in the new iPhone line. The recent iPhone 6 launch event was marred by various livestreaming issues, including Chinese overdubbing and frequent crashes. Here’s hoping those issues with the livestream will not happen again during the October 16 iPad keynote. You can get a sneak peek at the new iPads in this leaked manual page from Apple, which hit the Internet on October 15.

Let’s also hope that the new iPads themselves launch without any major issues. The days and weeks after the iPhone 6 launch were littered with controversial news about the new iPhones. Between issues with iOS 8, the “Bendgate” scandal, and the more recent “Hairgate” controversy, the iPhone 6 launch has definitely been anything but smooth. Chances are, the iPad will be able to dodge any issues with bending and hair-pulling, since it is used in a very different way than an iPhone. Still, the pressure is definitely on as Apple tries to remain top dog in the tablet world amidst a lot of consumer grief.

If you own an Apple TV set-top box, you can watch Apple’s Keynote event live on October 16. Just select “Apple Events” from the main menu to watch the livestream. The icon you’re looking for is white, with a light tracing of the top of the Apple logo. That logo, incidentally, might be changing very soon.

Watching the livestream on your Apple TV is great way to watch if you want to view the keynote on your TV, thus freeing up your laptop or tablet to view live blogs about the event. Make sure that if you have any updates to install on your Apple TV, you start the update process well before the event’s start time. It would be sad if you missed the start of the event because of a slow update. If you don’t see the channel on your Apple TV interface in the days before the event, don’t panic. Apple will make the channel available on the day of the event. You can also view past keynote events through this channel.

On any mobile device running iOS, you can simply point your Safari browser to this link. The video should begin to play once the countdown ends. Do note that you may have difficulty getting the livestream to play if you use a mobile browser other than Safari, so even if you generally prefer another browser, you should use Safari for this event. iPod Touch devices, iPhones, and iPads should all present you with an easy option to view the October 16 iPad livestream on the go.

4. Familiarize Yourself With Apple’s Livestream Limitations & Find a Liveblog

Per Apple’s Live special event site, here are the restrictions you may encounter when trying to watch the keynote livestream. Make sure your device of choice meets the specs outlined below, and you should be able to enjoy the iPhone 6 keynote, uninterrupted:

if you’re trying to watch the livestream at work on a Windows or Linux machine, you are probably going to have issues. You’ll also want to make sure that your OS is up-to-date in order to get the best experience. That being said, Windows machines with Quicktime 7 installed should be able to see the keynote.

If you don’t own a compatible Apple device, and you don’t have a computer or tablet that will let you watch Apple’s keynote livestream, don’t despair. You have some other options for staying up-to-date on Apple’s latest product announcements. For example, Twitter is a great source of real-time news and funny reactions during Apple events.

Additionally, you can follow along with liveblogs of the event. MacRumors, Gizmodo, and CNET will all have liveblogs of the October 16 Apple event. Even if you do have a viable way to watch the Apple keynote livestream, you might want to tune in to a liveblog as well. Liveblogs are a great way to get additional insight into the keynote, or simply get confirmation of specs and features when the speaker is going too fast for you to follow along. 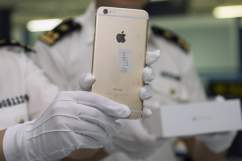