A nice array of great mobile games hit the Android Google Play store at the start of the new year. Along with these new games to pass the time with, several other released games have maintained their stronghold over the top games chart. We’re here to make sure you download some of the finer outings available to mobile games who game primarily on Android devices. These are simply the top five best Android games of January 2015. There’s action, puzzle, strategy and racing games that you’ll need to play. Here’s just a few of the best,

Greed for Glory: Build Your Legend!Play for FREE on Android: https://play.google.com/store/apps/details?id=com.perblue.greedforglory.dc Greed for Glory is a brilliant city defense game that combines strategic building with fast-paced, epic battles. Join a kingdom and battle other players while leading a mighty army of knights, elves, wizards, dragons, and other fantasy creatures in tactical online wars. ***** "Fun kingdom building game. Build your…2013-11-05T18:35:19.000Z

The Clash of Clans experience comes into play here with Greed for Glory: Savage Heroes. Your duties are as follows – build up a grand kingdom, recruit a large array of powerful heroes, play through a large number of campaign missions and fend off rival players who have kingdoms of their own. You’ll get to grow your kingdom over seven technological ages, so you can see you kingdom in a new light.

Words On Tour Official Launch TrailerWords On Tour is the new word puzzle adventure from the makers of Words With Friends! Solve hundreds of challenging word puzzles and travel through endless levels to reach some of the world’s most famous cities. • CONNECT adjacent letters to form words by sliding your finger forwards, backwards…anyway you can • SOLVE puzzles by…2015-01-15T13:45:51.000Z

This change up in the Words With Friends formula transports players around the world for even more word matching fun. There are several new ways to spell out all types of words and this time you’ll play around several popular cities all over the world. Hidden phrases, stamps and tiles are meant to be found as you play like a madman in Words on Tour.

Geralt and a host of other notable characters from The Witcher video game series make their way to the MOBA arena in this new mobile hit, The Witcher Battle Arena. Players have to work in conjunction with each other as they look to take ownership of stage pillars and fend off their rivals. Matches move fast and are always a joy, plus the amazing selection of characters skins and powerful equipment will keep you in for the long haul.

The massive superstars who rule the WWE battleground are ready made for war in this new mobile fighter. WWE Immortals takes your favorite wrestlers into the fantasy realm and transforms them into even more formidable badasses. The makers of Mortal Kombat and Injustice: Gods Among Us did an excellent job of making each wrestler look larger than life and fight with amazing signature maneuvers that have to be seen to be believed. 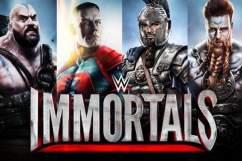 Drag Race: Rush – Android Gameplay HDFOR MORE ANDROID GAMES -http://www.youtube.com/user/androidgameplaynet?sub_confirmation=1 Get ready for the ultimate 3d drag race adventure and join the rush of an adrenaline rising amazing game. As the world's best drag racer title has been snatched from you, gear up and search revenge as you join speedy quests across the globe. Prove your skills and claim revenge…2015-01-19T04:40:08.000Z

Drag Race: Rush brings the fast-paced drag racing you’ve watched countless times in blockbuster flicks to your Android device. The amazing visuals do a fine job of showcasing the speed and breakneck one-on-one racing his dangerous pastime is known for. You can rush through a bunch of races in a short span, which lends this game a ton of quick playthroughs while you’re on the go. You’ll love every minute of this fast paced racer.