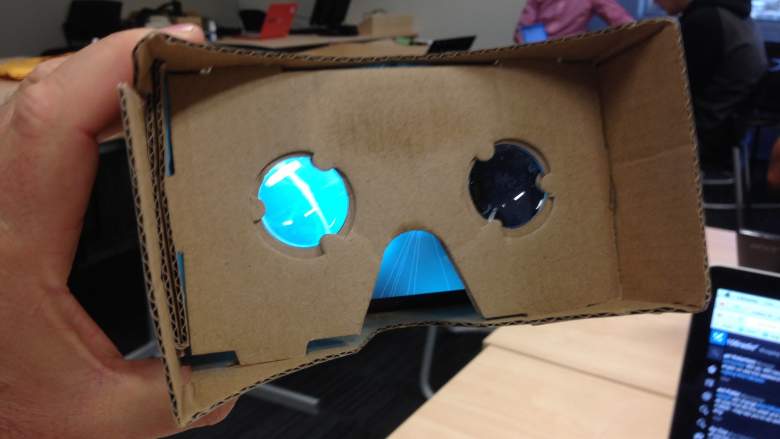 From Nintendo’s retina-damaging Virtual Boy to the early 2000s’ arcade VR boom, virtual reality has never quite stuck around for good. However, now that market support is growing with enormous backers like HTC, Samsung, Valve, and Sony, consumers can expect to see virtual reality become a permanent staple in the lives of the tech-savvy. Currently you can access big name VR headsets in the form of various developer kits, but the lack of content and incomplete feature set for these platforms means that these developer kits are only a glimpse of what’s to come from these companies.

As of right now, the easiest access you have to VR technology is through a smart phone. Using the powerful hardware of the newest smartphones, you can begin immersing yourself in VR much sooner than expected, and with a level of investment varying from full developer kits to simple DIY kits based on the Google Cardboard paradigm.

Now that Google has released its Cardboard SDK for both Android and iOS, app developers on both platforms can now program apps that respond to head tracking, 3D calibration, and user input event handling through headsets that require as little as a cardboard frame. This means that content for these simple headsets will be coming out faster than that for full-on headsets, and that the time to get involved in this project is now. Check out Heavy’s top 5 mobile-based VR headsets below. 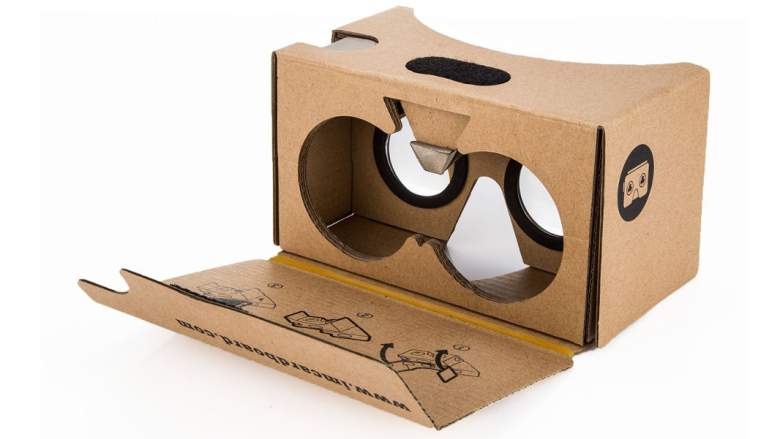 I AM CARDBOARD proves to be ahead of the curve once again with their speedy release of their I AM CARDBOARD v2.0 kit only shortly after Google updated their own cardboard kit. The main improvement between the two versions is support for phone screens up to 6 inches (like on the Samsung Galaxy S6).

Other improvements are also present in the 2.0 kit, including a conductive foam button that replaces the magnet switch of version 1, and works with any phone. It is also easier to assemble, now just a three-step process. More info on the differences between the new and old cardboard models can be found in the video below.

All I AM CARDBOARD kits comes with an NFC tag, which is used to trigger the launch of the Google Cardboard App automatically when the phone is placed on it. And while it lacks the full touch interface of full-size HMDs, this cardboard headset can do a surprising amount, from simulated spaces to games that track your head motion.

If you have a phone with a larger than a 5.5 inch screen, this is your best option, but those with smaller phones will also appreciate the updated touch controls and easy assembly. This unit comes in colored options too, but we chose the original cardboard variety because it just felt right.

Find more I AM CARDBOARD v2.0 information and reviews here. 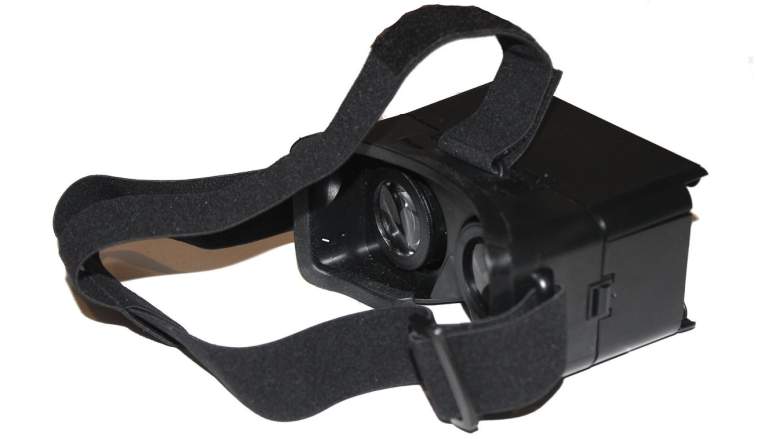 The ColorCross Universal VR headset is modeled to the specifications of Google Cardboard, but distinguishes itself with its plastic body. The front end of the headset is expandable on all sides to accommodate phones up to the size of the Samsung Note, and the position of the internal lenses are adjustable as well for optimum picture quality from any sized phone.

It has a full head strap to keep it in place, as well as foam padding for comfort. Note however that the nose support does not have padding, and can be an area of discomfort. Another thing this headset lacks is an NFC tag, so you will have to load the app yourself before inserting the phone into the headset.

There is no control interface either, so using it for Google Cardboard games will mean also connecting a Bluetooth controller of some sort. That said, using this headset with a controller is a great experience, and a lot of the virtual environment content available through the Google Cardboard app does not yet work with controls anyway. For those looking for a simple VR experience made from better material than cardboard, the ColorCross is a solid pick.

3. I AM CARDBOARD EVA Version 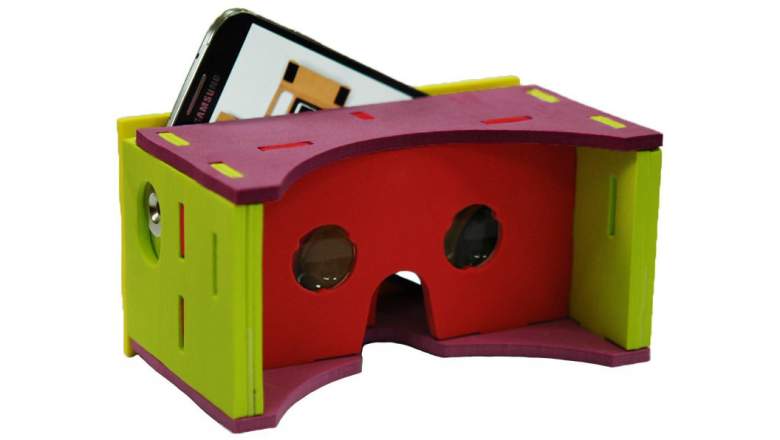 Another stylish, high quality kit available from I AM CARDBOARD is the durable EVA foam model that is about $10 more than their cardboard version. Yes, the color scheme makes it look like a Kindergarten play structure, but when you’re wearing it, all you will see is a virtual environment in full viewing range.

It may as well be stated now that anyone who is concerned about looking cool is going to have some serious problems with strapping a phone to their face. Plus, in the case of the EVA foam version of this headset, the different colored pieces make this headset as easy to put together as its cardboard counterparts.

Both the foam and cardboard versions of this headset can be assembled in less than a minute thanks to easy to follow numbered tabs. While the cardboard version of this product uses velcro squares to secure the phone, the EVA foam version has strong magnetic buttons, as well as a pad with suction cups to further prevent unwanted movement. This headset does include a head strap as well, though it is somewhat small if you have a larger head.

While the EVA version of I AM CARDBOARD’s headset isn’t yet updated to 2.0, its responsive magnet selector on the side works about as well as the foam touchpad, and can still be used in conjunction with head tracking to smoothly navigate menus and make selections.

The headset will fit phones up to Samsung Note size, but you may have to remove its case to do so. Some users report a low field of view from the 45 mm lenses, but this is to be expected of any device measuring to Google Cardboard specifications, as that is the focal length they chose to standardize. For the price tag of these headsets, though, it is hard to say that this diminishes the experience, as they give a surprising amount of entertainment for what they are: a pair of box glasses for your phone.

Buy the I AM CARDBOARD EVA Version here. 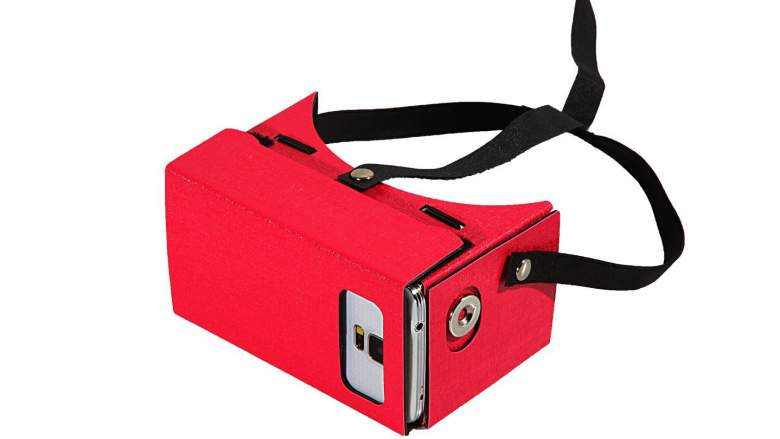 Soyan is another brand that makes a 3D headset kit that will be a bit more durable than the from-scratch cardboard kits you can make yourself. If your goal is to make a true cardboard heaset, it is possible to make one yourself from a template, but this headset is a more durable product that you can still feel good about assembling yourself. Its semi-plastic material is water resistant, and has additional features like suction cups to hold the phone in place. The headset is designed to fit phones up to 5 inches, which means it will not hold Samsung Note-sized phones. Anything smaller is no problem, however.

There is also a magnet selector on the side, but on the product’s Amazon page, they do have a short list of phones that do not work well with the selector. One common complaint from buyers is that the NFC tag did not come pre-programmed, and therefore requires a little extra setup to make it open the Cardboard App. This does, however, mean that you can program it for other uses, which may have potential for usage with alternative VR apps as they appear.

While the other headsets on this list hopefully demonstrate that Google Cardboard can be taken beyond cardboard kits for a more long-lasting and enjoyable experience, there is no better option price-wise than to actually make one from cardboard. If this is your goal, again there is a template out there that makes for a fun build from scratch project, and there are also plenty of manufacturers that make pre-cut cardboard templates that are ready to go out of the box after a couple folds. Since NFCGuyz includes an NFC tag with theirs, they earned a spot on our top list for those who want to take the traditional cardboard option.

Just because it is cardboard does not mean that it is short on quality, though, as it will still have the magnetic selector on the side and the same quality focal lenses. The lenses it comes with are 40 mm instead of 45 mm, which isn’t an issue for some, but for others, causes some blurriness. But again, if cardboard is the way you want to go with your headset, you can probably find an alternative kit out there to build.

Read More
Android, Shopping, Technology, VR
wpDiscuz
2
0
Would love your thoughts, please comment.x
()
x
| Reply
A smartphone and the Google Cardboard App is the easiest and most affordable way to experience immersive VR.