The action games sub-category on the Google Play store has been packed with new titles lately. A slew of mobile titles that include elements of horror, ancient Roman warfare, action sports and more are now available for download. Our next selection of the top best new Android-device enabled games you should play is full of worthy selections. Do yourself a favor and kill some time playing these top five best new Android action games of March 2015.

Sure, we’ve turned the camera plenty of times to encounter unspeakable horrors looking back at us. And we’ve had he hardest time getting over our fears every time we hop into this game. But we still have the time of our lives getting scared to death playing Five Nights at Freddy’s 3. The premise stays the same – you’re on night watch inside your (safe?) haven within a horror fun house. You need to keep tabs on the animatronics that are housed within the building and make sure none of them surprise you…and kill you. This series is only getting better, so make sure you scare yourself silly with the 3rd iteration.

This top-down, action game is a pretty awesome hack and slasher. The Roman warrior theme gives off vibes of the God of War series and adopts the gameplay elements of classic such as the Diablo series. Your band of heroes includes a Gladiator, Warlock and Barbaress, who all come with their own brand of great combat skills. The massive scope of this game is realized when you run into some well-known mythical beasts and Gods. The fast-paced battles, high chances of discovering plenty of loot and easy to understand controls, Blood & Glory: Immortals is a bloody good time.

Regular Show has to be one of the strangest cartoons ever conceived for the young tots out there. It has endeared itself quite well to the older crowd out there due to its pothead friendly humor. The newest mobile game based on the adventures of Mordecai and Rigby comes in the form of Grudgeball. This custom fantasy sport unravels through plenty of single-player matches, arena mods and the use of dozens of playable characters from the show. The action here is fast and furious, so even non-fans of the cartoon this game is based on will appreciate it. Throw yourself into the world of Grudgeball.

Combo Queen is the type of mobile game that’s ready made for fighting game players. Your main character has to go to war with a near infinite array of beasts and warriors. She must vanquish them through her use of combo-heavy attacks and use of parry’s. The fights play out like your favorite action anime and the dungeons you venture through are randomized for high replay value. The Queen is easy to grow attached to, but hard to keep alive against all her adversaries. Make sure you finger is prepared for the double-digit combos this game doles out.

The 2nd installment of Zombie Highway action comes with the expected upgrades – new gameplay mechanics, new vehicles, plenty of horrifying zombies and more levels to run them over on. You’ll be tasked with hitting the open road while the walking dead grab onto your ride. You’ll need to carefully maneuver around and clip those damned zombies off your precious car. With the nitro boos abilities granted to you and the presence of your live friends’ ghost car runs, Zombie Highway 2 is a game you’ll have a hard time NOT playing. There’s so much to do and destroy in this game, so make sure you hop into for a good time. 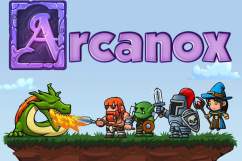