If seven Fast and Furious movies have taught us anything, it’s that people love to race. Not all of us can jump in a car late at night and drift down the streets of Tokyo, so we will have to settle for playing games. The iTunes store has plenty to choose from, but these five free options are Heavy.com approved. Get your helmets and driving gloves, it’s time to race.

There isn’t a better way to start this list than with Fast & Furious: Legacy. Much like the movies, you have to sit though a lengthy flashback cut scene before the action can begin. While the gameplay starts out sort of slow, you only tap the left or right side of the screen to change lanes, but as the game goes on you gain more skills. Upgrade your car as you gain points and go on missions with Toretta and Letty. Missions go across all seven movies and introduce all of your favorite characters. If you aren’t in the mood for story mode, create your own crew and join head to head battles. This is the only official game of the movie franchise.

Grand Theft Auto and The Walking Dead come together to create this silly game. Jump into a monster truck and run down any zombie in your path. Collect coins to buy different cars including a school bus with huge wheels and fire. Head from Los Angeles to New York and take down anything that stands in your way. Use powerups to go faster or shock various undead. Watch out for the muscular zombies that will fight back and hurt your car. Make sure to clean your windshield of zombie goo so you can properly see where you’re going. Choose between swiping or tilting gameplay.

Fight evil with either Batman or The Flash. Run through the streets of Gotham after The Joker, avoid obstacles and beat up thugs to protect the city you love. If Batman isn’t your speed, pun definitely intended, opt for The Flash running through a jungle attacking giant apes that stand in your way. Collect coins to upgrade your weapons and costume to be the scariest Batman or Flash you can be. If you aren’t feeling heroic, take a hand at villainy and play as The Joker, Gorilla Grodd, Baine or Catwoman and bring Batman and The Flash down. Every day the game will have a new challenge to complete that will earn you coins.

One of the most realistic racing games on the app store also allows you to play against real people. The app pulls in everyone playing the game at the same moment and creates a race. Steer by tilting the phone and holding down on the gas button. As you get more experienced, you will be able to shift and control the car. The more you win, the more points you get and you can upgrade your car. For racing enthusiasts, you can drive on 12 real racetracks. Hug the corners in Silverstone or embrace the straight aways in the Dubai Autodome. Compete against your friends in drag racing, cup races, endurance and eliminations. Now you can even play on Apple Watch.

Set in the 1970s, Does Not Commute starts out with the player delivering members of the community to their jobs or the grocery store. Soon you get to know the people behind the cars and their personal lives. Why is the mail carrier spending so much time at certain friend’s house? Why does the office worker keep forgetting her key card? Learn how to get places quickly while also finding out about the people you’re controlling. The more you play the more traffic you have to deal with. Watch out for the other people speeding on the road as you get less time to get to your destination. This is an interesting take on a classic driving game. For a fun surprise, swipe between radio stations to get funny messages. 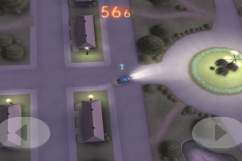 How to Use Do Not Commute Racing App for iPhone