We’ve been through a number of quality strategy-minded mobile games for the month of May 2015. Through our marathon run of great Android strategy games, we’ve narrowed them down to our five favorite titles. Longtime mobile game developer/publisher has launched a serious take on wartime games, plus we have some entries that delve into several different genres. Whether you prefer war ships, zombies or medieval skirmishes, these top five best new Android strategy games are right up your alley. Put together your best plans and go into these titles as a natural, victory-fed leader.

Empires & Allies Launch Trailer Full Video HDDownload Empires & Allies now on Android: bit.ly/EmpAll and iOS: bit.ly/EANow Join your friends, form alliances, and get ready to build your empire. Welcome to Empires & Allies, an all-new modern military strategy game that puts the weapons of modern war at your fingertips in a never-ending battle to conquer the world. – DESIGN YOUR…2015-05-05T12:53:07Z

We’ve devoted plenty of countless hours to mobile games that veer into the modern warfare sub-genre of strategy games. One of the best new entries into such a varied lineup of mobile games is Zynga’s Empires and Allies. For fans of games such as Command & Conquer, this explosive title will fill your needs. The GRA is your main enemy here, so you’ll have to build up your impenetrable fort and construct the perfect army. You’ll be able to hop into live player alliances, engage in massive battles and deploy the strongest weapons in your arsenal. Empires & Allies is a must-play. 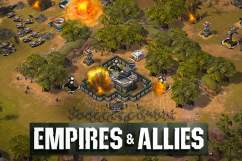 Rival Kingdoms: Age of Ruin pushes players into olden and magical times for kingdom building and epic campaigns. Your base must be built with several factors in mind as you battle alongside the self-proclaimed “Ancients.” Your army will consist of legendary warriors, gods and mystical monsters who you’ll employ for your war against the forces of Ruin. There are no troops to train, so you can throw your army into the fray without too many worries. Fight to keep your kingdom safe and march to victory!

Building up a bunch of kingdom setups with pre-ordained buildings is cool and all, but there’s something truly awesome about putting together your custom made tower. Fortress Fury combines tower building and tower defense into an addictive mix that’s insanely addictive. Before you head into battle, you’ll use a number of elements to create a tower that reaches into the sky. For fans that create amazing things in games such as LittleBigPlanet, this portion of the game is the perfect one to play. The battle mechanics are just as good, so there’s a lot to enjoy here.

There’s always time for ships. Especially huge naval battleships. Age of Ships knows that fact very well and it places you in a world that’s dominated by them. You can amass over 200 different warships from a variety of strong fighters – cruisers, carriers, battleships and more. You’ll have an awesome time bringing in such timeless ships and engage in wars with offline/online players. The campaign mode is a worthy time waster, plus the visuals shine to the point where you feel like you’re playing a console game. Age of Ships is a mobile game you should enlist into.

DEAD EYES (By LoadComplete) – iOS / Android – Gameplay Video"Don't let the dead eyes find you." DEAD EYES is a turn-based puzzle game in a grey foggy world being taken over by zombies. In every stage, you will help Jack, a curly-haired boy left alone, survive and reach the destination alive. Dead Eyes features: -100+ levels in 4 Episodes -4 different zombie types with…2015-05-14T17:50:23Z

Dead Eyes adopts the 8-bit pixelated look of gaming’s golden years and also drops in some horrifying zombies to avoid. Your goal is simple – keep your single human alive, use the allotted steps given to you, avoid the undead in your vicinity and escape. Make sure you don’t look those walking dead in the eyes and make sure they don’t see you. The extra goals given to you amplify the fun factor here and the myriad of great stage layouts will keep Dead Eyes in your Android game rotation for months to come. 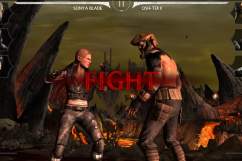 Read More
Android, Android Smartphones, Android Strategy Games, Android Tablets, Games, Mobile Games, Tablets
We've done a bit of strategizing ourselves when it comes to picking the best mobile games in the genre for May 2015.