Although piloting drones is a mostly fun experience, not everyone wants to fly a drone themselves. There are plenty of uses for drones, especially now that they’ve become incredibly popular. There are racing drones, camera drones for photography, and toy drones just to have something to do for a day at the park. But, what about those who just want to capture sweet footage without having to hold a controller to control the drone itself?

There are plenty of auto follow drones available on the market right now, each of which has their own set of pros and cons. Finding the right automatic follow drone for you isn’t a task that should be taken too lightly, since there is such a variance in quality in the marketplace. When looking for the right quadcopter to fit your needs, you should factor in price (of course), but also battery life, durability, special features, and what accessories might be available for you in the future. Luckily, you have me, a known drone enthusiast. So if you’re looking for drones that track you while you ski down a mountain, catch some air in a half pipe, or hit the trails, check out our list of the top 5 best auto follow drones:

3DR is well-known in the drone-lovers community for manufacturing quality products, and this 3DR Solo kit on Amazon is one of the best drone kits for sale in 2016. It not only comes with the Solo drone (which released just last year), but it also comes with the 3DR Solo gimbal, a high-performance microSDHC 32GB card for storing your footage, an extra battery, a GoPro Lens Hood Frame, and a Polaroid 5 piece camera cleaning kit.

The 3DR solo is the first drone to be powered by twin computers, and it’s the only drone to stream wireless HD video from GoPro directly to iOS/Android devices. It also uses powerful Smart Shot technology that creates incredible cinematic footage automatically, which is one of the reasons we’ve included it on this list of the best follow drones. It has an orbit feature that tells it to circle you, creating beautiful and cinematic footage with ease. It also allows you to split the work between you and the drone, as you can let the drone fly itself on a predetermined path while you focus on operating the camera, or you can control the drone’s flight while it controls the camera. There are numerous options and solutions for those looking for an autonomous drone, and the fact that you can override the settings that you’ve input at any time for minor tweaks makes it one of the best.

EHang’s newest autonomous drone, the GhostDrone 2.0, is one of the best follow drones on the market for its price point. It comes in at just $599.99, but it has a ton of features that should make it much more. Most notable for the GhostDrone 2.0 is that it comes with a best-in-class NO FAULT warranty that covers hassle free repairs or a total replacement for up to three events, even covering shipping cost both ways.

It comes with a 4k sports camera that has four different resolution settings, allowing you to capture 4K footage at 24FPS, 2.5K at 30FPS, 1080p at 60FPS, or 1080p at 120FPS — it’s all about the options! It has a 25 minute flight time on a single charge, and the battery charges fully in just an hour or less. It has a half mile range, too. The GhostDrone 2.0 has many different modes that make it great for inexperienced pilots, including Waypoint mode, Companion Mode, Avatar Mode, and a Flight Planning Mode. Best of all, it’s controlled with a smartphone, so you don’t need to lug around a hulking controller. It’s also weather resistant, so it can stand up to moderate rain and wind. What’s more, it can be used via FPV, and follows the movement of your head to control the drone (or its camera).

If you’re looking for the best-in-class, top-notch option, the DJI Phantom 4 is the top-tier choice. It’s one of the best camera drones on the market, and it comes packed with helpful features that take it a notch above the competition (a typical trait of DJI’s drones). It has a feature called ActiveTrack which is so easy to use. Simply tap an object on the screen, and the Phantom 4 will track that object’s movements. So, you can tap yourself on the screen, and the drone will follow you, recording footage along the way; it’s THAT easy. It also has a Smart Return Home function that safely brings your drone back to where the receiver is, smartly avoiding obstacles along the way.

It also has other options that make it a great camera drone, including precision hovering that make it easier and safer to fly thanks to its Vision Positioning System. It has a whopping 28 minute flight time, which is a 25% improvement over the Phantom 3.

For the cheapest option, the clear winner is the Monoprice Hubsan 501S 1080p, which obviously lacks the more impressive features that the higher-priced drones tend to have. Still, it’s a great option for those who just want some good footage easily and don’t care about 4K resolution. It has a built in GPS that allows it to have a return home function and follow me mode, and it has first person view capabilities, so you can use virtually any of the best FPV goggles that are available. It has an intelligent battery with a large capacity that brings over 20 minutes of flight time, which is certainly impressive for the price range.

In Follow Me mode, it only has simplistic functions. Basically, you’ll set the elevation and orientation, and then the drone will maintain that orientation relative to the position of the transmitter.

As far as portability and ease of use is concerned, you won’t find a better drone than the AirDog. It folds down to a respectable size, allowing you to bring it with you everywhere you go — and you’re going to want to do just that. It’s SO easy to use, simply set it on the ground, strap on the wearable that it tracks, and tap a button on that wearable, and the AirDog will follow you.

The camera isn’t included, but it has a GoPro gimbal onboard, so if you own a GoPro, you’re going to want to use that. Despite its price, it’s the best follow drone on the market due to its incredible ease of use. 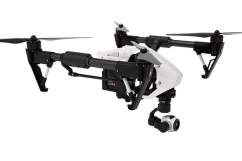 Read More
Drones, RC Drones, Shopping
wpDiscuz
5
0
Would love your thoughts, please comment.x
()
x
| Reply
You don't have to be a skilled drone pilot to capture some great footage, as some of the latest drones have autonomous follow modes.