DxO’s ONE camera is an interesting smartphone companion. A pocket-sized professional quality camera is a nice addition to any photographer, journalist or photography enthusiast’s toolbox. However, it’s more of a fancy dongle than a pocket camera; and at $499, many might opt to buy an actual camera instead.

Pros
Small, compact
MicroSD slot for storage
RAW photos allow for flexibility when editing
Takes both RAW and JPEG photos
Good photo quality
Wireless options
Useful for both pros who like manual options or those who stick to auto modes
Good quality video

Cons
No Android connectivity
Heavy, makes phone phone feel unbalanced
RAW photos are not ready to upload (but JPEGs are available)
Two hour battery life, hour and a half to charge
Can be unstable and awkward to hold
Monopolizes lightning port
Expensive 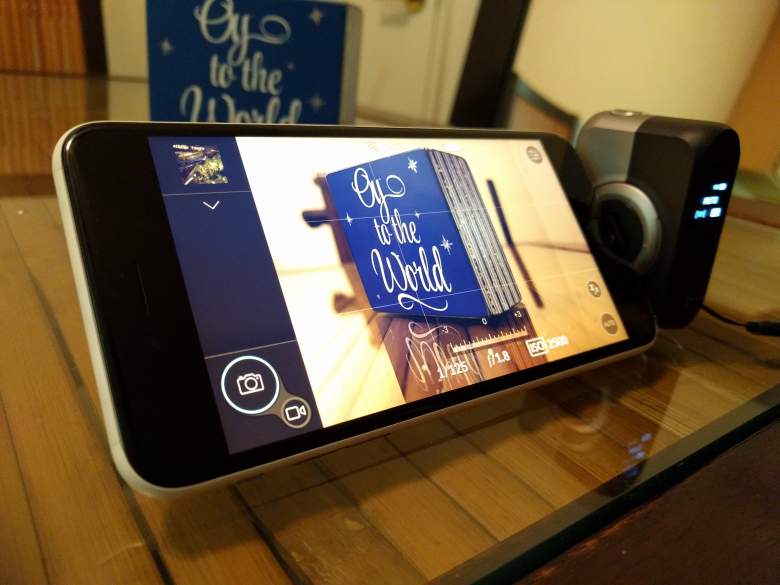 Here’s a nice view of the iPhone 6 Plus being used with the DxO ONE app. It makes a nicely-sized viewfinder.

The DxO ONE is fun to use, and makes any iPhone into a high-quality camera. The software includes a variety of capture modes, including manual options, and the results are undeniably good. This small camera packs a punch, with 5544 x 3694 resolution and 1080p video that looks HD even on a large screen. 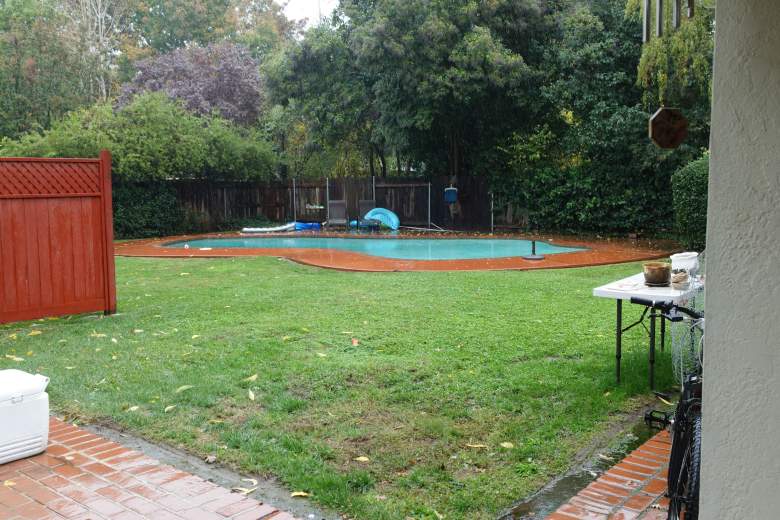 This shot of a backyard shows how bright the DxO ONE’s colors are. It had just rained, so the vivid green of the grass and red of the brick around the pool are extremely accurate.

The downsides are fairly steep, though, I have to admit. I had to borrow a friend’s iPhone to test out the ONE camera, since I’m an Android user. This alone excludes over half of their market, with The Huffington Post reporting that Android users make up 52.6 percent of U.S. smartphone owners.

“The camera is iOS only at this time because a) it makes use of the lightning port for a fast connection and b) there is not one single form factor for Android phones (i.e. the headphone jack can be at the top, bottom or side of the phone) making it difficult to design a single hardware product that will work well with all Android phones of different makes and models,” said a PR spokesperson for DxO in an email. While this is true, there are several Android manufacturers with more constant designs — Samsung, for example, or the Google Nexus and Pixel lines. The Nexus and Pixel lines in particular would play well with the DxO ONE, given their reversible and fast USB-C connections. 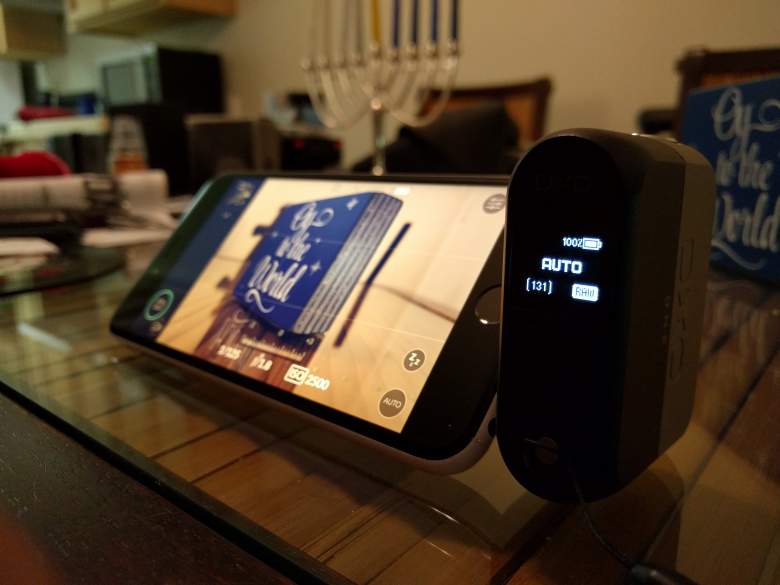 This photo shows the DxO ONE alongside an iPhone 6 Plus. With smaller iPhone models, the ONE is more awkward to hold, but even with the Plus it’s a little awkward.

Plus, the actual build of the camera leaves something to be desired. It’s a little heavy and bulky next to a sleek smartphone, and holding the camera takes a bit of getting used to. Holding it one-handed feels a little risky, since that puts all the weight on the delicate lightning port. The ONE can put a lot of strain on the port, since that’s all it uses to connect to your phone. It doesn’t seem very stable, either — it can be jostled pretty easily, and since it’s fairly heavy it can unplug itself. If there was some sort of clamp that secured it to your phone while it’s plugged into the lightning port, using it would feel a lot less awkward. Even a little 3D-printed brace would help. 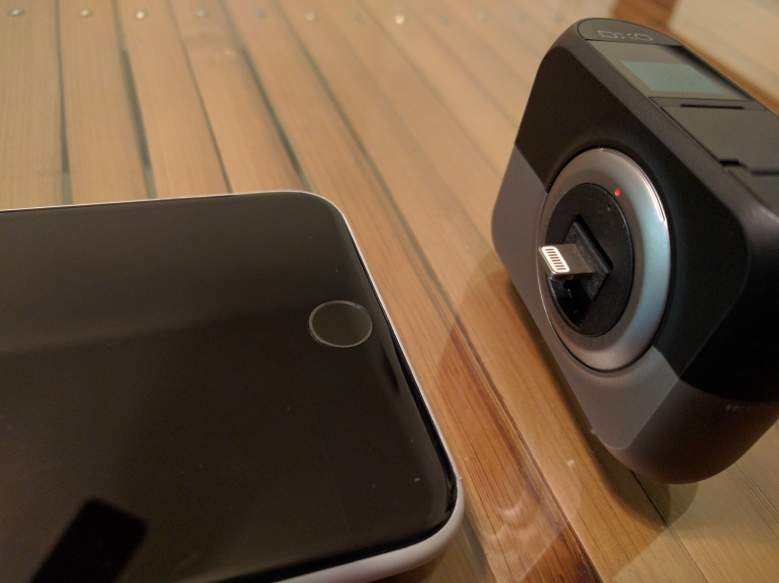 This photo shows how little support the small lightning plug coming off the ONE receives.

Since your screen is on and being used as a viewfinder while using the ONE, battery life can also be an issue. Unfortunately, the ONE monopolizes the lightning port, so if you want to take a photo but you’re at 6%, you’re out of luck even if you brought a portable charger. This could also be an issue for those who enjoy their Mophie battery cases. 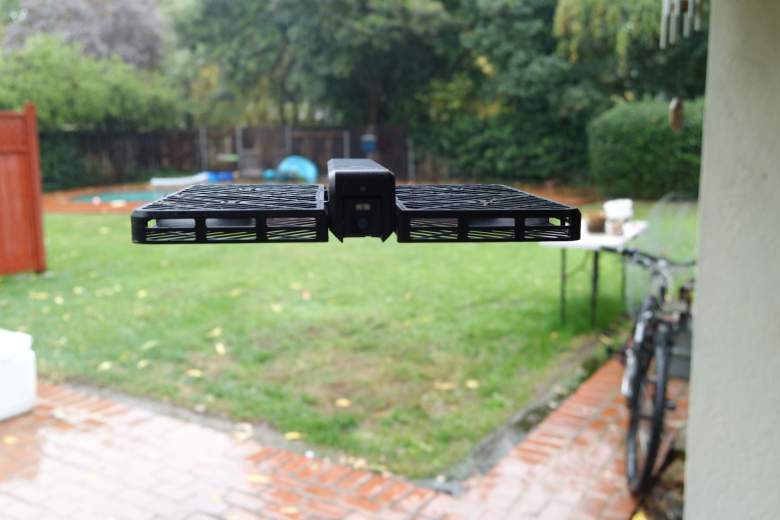 This shot of the Hover Camera, which Heavy reviewed last month, shows off the vivid colors and sharp focus of the DxO ONE’s camera.

The bigger battery-related issue, though, lies with the ONE itself. I could spend hours describing every gripe I have with this little camera, but the fact is that it takes good photographs. If you wanted to bring it on a vacation or a day at the park, though, you might have an issue: the battery only lasts about two hours. It also takes about an hour and a half to charge, with no fast-charging capabilities, via Micro USB. The battery isn’t removable, so you can’t simply bring an extra.

If you want to get past the awkward shape, weight and lightning port issues, you may be in luck: The DxO ONE’s software update allows for wireless use! In my short experience, this may shorten the battery life further, but it’s a good feature. The DxO uses either its own Wi-Fi connection, which can be used anywhere, or co-opts your home Wi-Fi connection. This way, you can point the DxO wherever you’d like, wirelessly, while still using your iPhone as a HD viewfinder. This also gives you two shutter buttons: One in the app, and one on the DxO ONE itself. 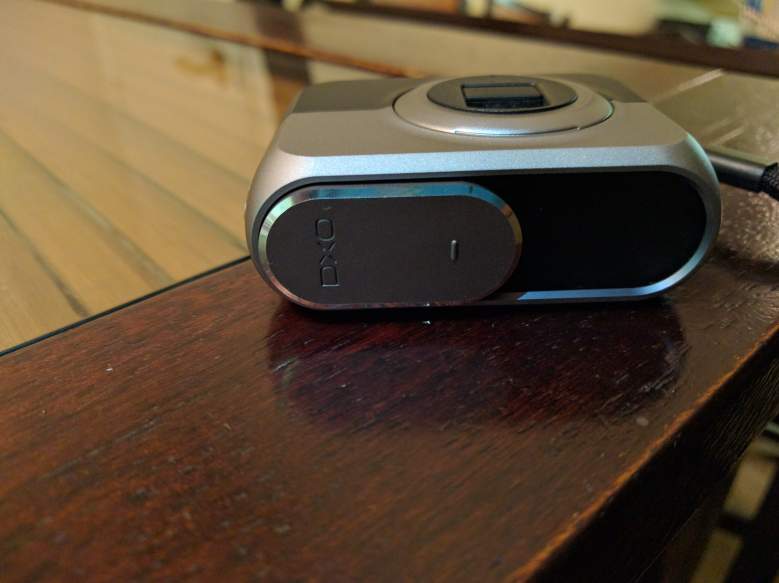 Here, the DxO ONE is turned off, with the sliding shutter over the lens. The lightning plug, normally pointing out, is folded in.

This helps with the lightning port stability issues, but it is still a bit awkward to hold the ONE stable on its own. Basically, either endure an awkward, uneven lightning port connection or use an awkwardly-shaped camera one-handed. It also takes a few tries to get used to holding the DxO ONE one way, but looking at your iPhone screen to see its vantage point. Once you get the hang of that small disconnect, it becomes a bit easier.

I have very few gripes about the actual camera on the ONE. It takes wonderfully crisp photos, and having access to both JPEG and RAW files makes the ONE accessible to photography buffs and hobbyists, as well as newbies. It’s easy to use, there are a variety of modes (auto, motion capture, low-light, portrait, etc.), and more experienced photographers can use manual settings. 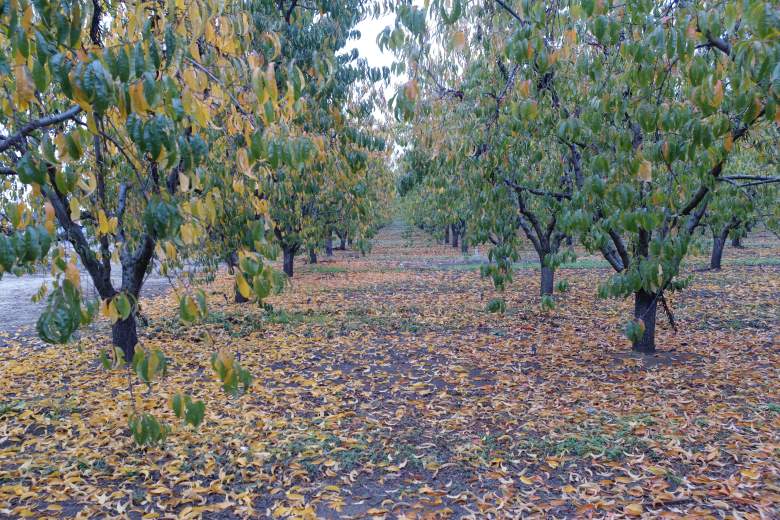 This colorful foliage shows off the DxO ONE’s strengths.

The colors are generally true and crisp, though the RAW files can be a bit muted, which is characteristic. These files are generally used in programs like Photoshop or Lightroom. 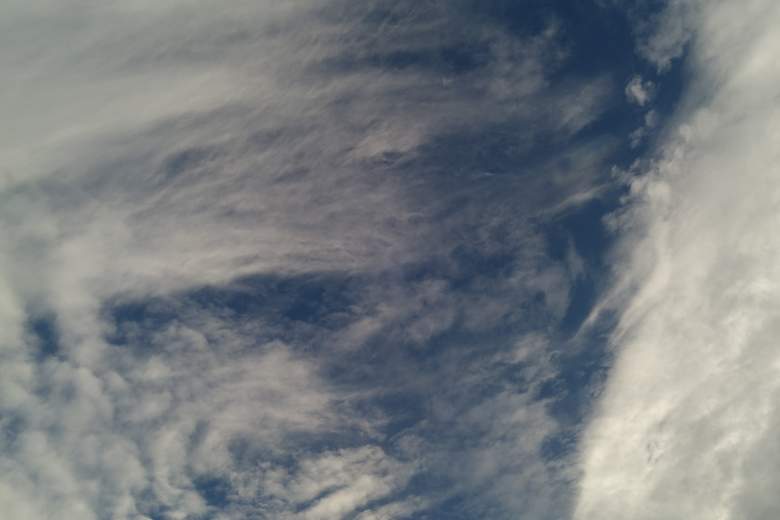 A plain old skyward shot shows how the DxO ONE handles focus and color. 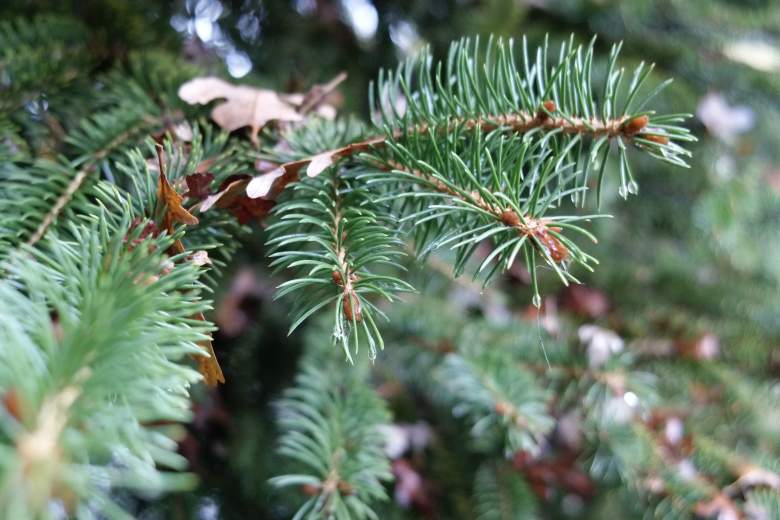 This shot shows how vivid the DxO ONE’s photos turn out.

The iPhone app is generally easy to use. There are a few issues with it; mainly, that it doesn’t open very quickly when the camera is connected. It’s meant to open immediately after the ONE is plugged into the lightning port, but it takes a moment to initialize. This is forgivable, but can become a nuisance if you’re trying to take a photo as quickly as possible. 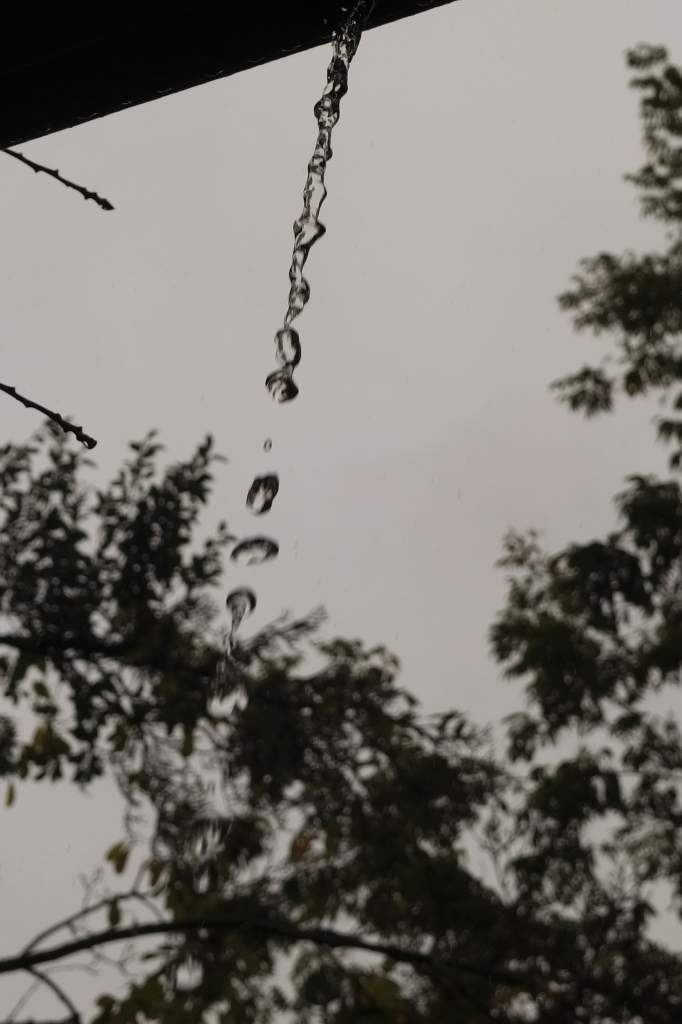 The colors are a bit off in this photo, but it’s impressive that the camera could catch this moment at all. Admittedly, it took several tries to get this shot in auto mode, but it worked out.

The app has its own gallery, though it does save photos to your iPhone’s gallery automatically. It also allows you to update your ONE’s software, view the user guide, access a message center, and buy accessories via the app. I haven’t really had issues with the app itself, unless the ONE slips and breaks the lightning connection. Then, the app gets confused and diverts you to the gallery until the ONE is reconnected. This can be obnoxious on older devices with less-than-pristine lightning ports. 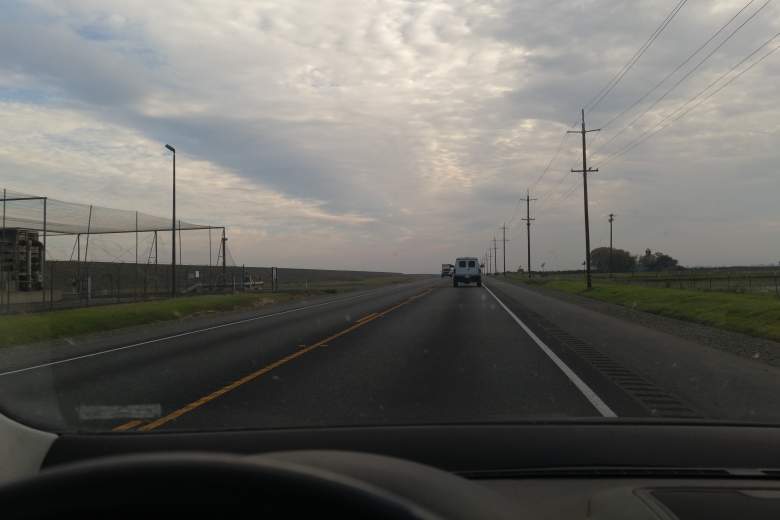 A shot of a long road in California tests out the DxO ONE’s camera.

Overall, the ONE is a solid camera. My biggest issues with it are the somewhat awkward design (and weight), the lack of Android support, and the high price. But from a photography standpoint, it’s a great little device.

It could be exceptionally useful for journalists, or citizen journalists. Anyone who regularly needs to pull out a small, ultra-portable camera quickly could easily stand to benefit from the DxO ONE camera. It’s a high-quality, ultra-portable solution for people who usually rely on smartphone cameras.

Read More
Cameras, Review, Shopping, Tech, tech gadgets, Technology
wpDiscuz
1
0
Would love your thoughts, please comment.x
()
x
| Reply
The DxO ONE camera is a high-quality camera in a highly portable package, but it comes with a hefty price tag. Does it live up to the hype? Find out here!