People are outraged this week after a GQ interview allowed the Duck Dynasty patriarch, 67-year-old Phil Robertson, to speak off-the-cuff about homosexuality and race. The controversial comments he made, as well as his self-described “Bible thumping,” have both viewers and the network scrambling to distance themselves from the controversial woodsman.

Here is what you need to know about the gun-toting millionaire:

On December 18, A&E, the channel that hosts Robertson’s popular television show Duck Dynasty, released a statement that the bearded hunter would be suspended from the show. The statement read:

We are extremely disappointed to have read Phil Robertson’s comments in GQ, which are based on his own personal beliefs and are not reflected in the series Duck Dynasty. His personal views in no way reflect those of A&E Networks, who have always been strong supporters and champions of the LGBT community. The network has placed Phil under hiatus from filming indefinitely.

Season five of the show is set to premiere on January 15, and it is not yet known how much of the new season will feature Robertson before the suspension pulled him from the filming process.

2. He Likened Homosexuality to Bestiality and Said Pre-Civil Rights African-Americans Were Happier

In the coming edition of GQ, Phil Robertson’s entire interview, which you can read online now, will hit newsstands.

In the interview, Robertson, a self-described “Bible thumper,” begins his discussion of homosexuality by talking about how “illogical” it is to him, saying,

It seems like, to me, a vagina — as a man — would be more desirable than a man’s anus. That’s just me. I’m just thinking: There’s more there! She’s got more to offer. I mean, come on, dudes! You know what I’m saying? But hey, sin: It’s not logical, my man. It’s just not logical.

Then, when asked “What, in your mind, is sinful?” Robertson went off on a train of thought arguing that “homosexual behavior” could “morph out” into bestiality:

It’s not just Robertson’s homophobic comments that have caused controversy. While speaking about his childhood in the “pre-Civil-Rights-era Louisiana” Robertson claims that all African-Americans were happy:

I never, with my eyes, saw the mistreatment of any black person. Not once. Where we lived was all farmers. The blacks worked for the farmers. I hoed cotton with them. I’m with the blacks, because we’re white trash. We’re going across the field…. They’re singing and happy. I never heard one of them, one black person, say, ‘I tell you what: These doggone white people’—not a word!… Pre-entitlement, pre-welfare, you say: Were they happy? They were godly; they were happy; no one was singing the blues.

3. ‘Duck Dynasty’ is Worth $400 Million in Merchandise Alone

The show launched its stars to fame, sending the gang to the Macy’s Thanksgiving Day Parade, and creating a giant merchandise empire valued at $400 million.

Forbes ran an article after Robertson’s suspension had been announced, that the giant merchandise empire that has been built in tandem by both A&E and Walmart, may be in jeopardy.

Former vice-presidential candidate and governor of Alaska Sarah Palin took to her Facebook page to voice her opinions on the suspension of Robertson, saying:

Phil Robertson and his family are great citizens of the State of Louisiana. The politically correct crowd is tolerant of all viewpoints, except those they disagree with. I don’t agree with quite a bit of stuff I read in magazine interviews or see on TV. In fact, come to think of it, I find a good bit of it offensive. But I also acknowledge that this is a free country and everyone is entitled to express their views. In fact, I remember when TV networks believed in the First Amendment. It is a messed up situation when Miley Cyrus gets a laugh, and Phil Robertson gets suspended.

5. He Was a Star College Quarterback, & Terry Bradshaw Was His Backup

Robertson came from humble beginnings in rural Louisiana — growing up as one of seven children in a home with no electricity or toilet.

He was eventually admitted to Louisiana Tech University on a football scholarship. There, he played first string quarterback, with a young Terry Bradshaw, a soon to be legendary NFL player, as his backup. 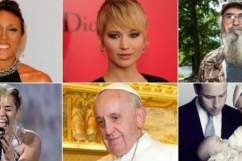