On tonight’s finale of 24: Live Another Day, Jack Bauer tracks down Cheng Zhi and the override device. Agent Kate Morgan volunteers to go save Audrey Boudreau from Cheng’s sniper pinning her down in the park.

Back at CIA’s London headquarters, President Heller works with the Chinese government to avoid war between the two countries.

They have to pursue Cheng despite his warning. Kate offers to go extract Audrey, with a small team. Once she has the president’s daughter, she will notify the CIA to send a team to help Jack capture Cheng alive.

Cheng wasn’t kidding around when he told Audrey to remain seated on that park beach. Her friend Jiao Sim remained breathing on the ground, but the sniper finished Jiao off when Audrey moves to save her. If Audrey moves again, the sniper won’t hesistate to kill Audrey as well.

Jack, Kate and Mark go through Anatol Stanovich’s emails trying to locate where Cheng was headed. Jack finds his cellphone in a drawer and unlocks it with Stanovich’s fingerprint. He finds a message that shows Cheng will be leaving on a ship later that night from the docks. Mark then receives a picture of Audrey in the sniper’s crosshairs from Cheng at the same time the Chinese torturer is calling to warn Jack to stay away or he’ll kill Audrey.

President Heller moves his command post to the CIA’s London headquarters. His military advisors request the president’s approval to put the nuclear subs on highest alert as the Chinese Navy moves closer to the United States’ base at Okinawa.

A passing car stops to assist Chloe walking on the side of the road. She borrows their phone to call Jack. She asks for him to pick her up and she’ll run communications for him as he tracks down Cheng on the boat. He’s not too keen on working with Chloe after she ran off with Adrian Cross, but she thinks the only mistake she made was believing in Adrian. Jack considers this and agrees to pick her up.

2. Chloe Tells Jack That She’s the Only Friend He’s Got Left

President Heller asks the Chinese President Wei to have his military stand down. Once they move into American territory around Okinawa, the U.S. will have no other choice then to retaliate.

Jack picks up Chloe (he even takes the time to ask the scars to suffered in her roll down the hill). After the caring moment, Jack demands to know why Chloe went with Adrian after he took the device. She didn’t know Adrian’s plan for the device and she now feels partially responsible for the day’s events. Despite taking sides with Adrian against Jack at times, she’s the only friend he may have left and he knows it. Chloe apologizes once more and Jack tells her that it’s not her fault. He then updates her on his plan for capturing Cheng and rescuing Audrey from the sniper.

"At this point, I think I'm the only friend you have left." – Chloe #24LADfinale

Kate sneaks into the park and spots Audrey on the bench. She calls Audrey’s phone and asks her to answer a few questions about the sniper’s location with small nods. Kate can’t spot the sniper in the building across the way so she needs Audrey to make a sudden movement to draw fire. The plan works and Kate is able to find which window the sniper is hiding. Kate and her team will open fire on the gunman and give Audrey enough time to clear the area.

Jack and Chloe are back in action! #24LADfinale

Jack and Chloe arrive at the docks where Jack’s old friend Belcheck has already surveyed the area. They’re going to need Chloe’s satellite help because there’s too many places on the docks and ship for Cheng to hide.

Kate is moving into position to get a clear shot of the sniper. Audrey needs to run toward the tree behind her when she hears the gun shots.

Chloe tracks the movement of Cheng’s guards so Jack and Belcheck can climb aboard the freighter. Jack asks for a status update on Audrey, but Chloe has not heard from Kate yet. Cheng’s tech guy notices the interference from Chloe’s satellite and Cheng sends his guards to find Jack on the boat.

Chloe notifies Kate to kill the sniper before Cheng can order him to kill Audrey. Kate takes out the sniper and secures Audrey, then contacts the CIA to send a team to the docks to help Jack. Chloe is able tell Jack about Audrey before Cheng’s men cut Chloe’s communication systems. With Jack moving in, Cheng orders the freighter’s captain to move out.

Cheng was using Audrey to get to Jack. Kate and the other agents escort Audrey out of the park, but Cheng has one more gunman standing by. He fires a few shots before Kate takes him down, but he manages to hit Audrey in the chest. Kate tries to apply pressure to Audrey’s wound, but it’s no use. Audrey is gone and the clock ticks down in silence.

Jack and Belcheck make there way further into the boat when Jack receives a call from Kate about Audrey. The news stops Jack in his tracks. He puts down the phone and sits in the hallway on the verge of tears. He gathers himself, reloads his guns and starts shooting everything that moves. When he can’t make a shot, he throws a knife from the kitchen at on of Cheng’s guards.

MAN ON A MISSION. #24LADfinale

Jack finds Cheng. Once Jack kills his security personnel, he and Cheng face off in hand to hand combat. Jack beats him to a bloody pulp but keeps him alive long enough to make positive facial and vocal recognition of Cheng for the Chinese government. Jack pulls Cheng away from the video monitor and decapitates his former torturer with a sword.

With the proof that Cheng fired the missiles, President Wei agrees to turn around the Chinese ships.

Now that the threat is neutralized, Ron has to break the news to President Heller that his daughter Audrey died along with her Secret Service detail. Hearing the news, Heller passes out as Mark watches from the other side of the room and realizing what happened.

At the docks, Jack and Belchek go to check on Chloe but they only find blood drops. Jack receives a call (only he can hear the other side of the conversation) and agrees to a meet.

5. The Russians Take Custody of Jack

Time jump! Flash forward 12 hours later and Kate’s turning in more than her field report to acting station commander Erik Ritter. She goes into her office, puts her badge and gun on the desk, and walks out of the station.

Erik goes to interrogation where U.S. military personnel are set to escort Mark Boudreau back to the United States to stand trial for treason. President Heller is getting ready to board Air Force One after the coffin carrying his daughter Audrey is loaded on. Prime Minister Davies offers his condolences to Heller, but the president tells him there’s nothing he or anyone could have done.

Jack wasn't the only one who lost somebody today. #24LADfinale

Heller recounts a story about a moment he had in the Oval Office before he made this trip to London. He was looking a picture of a beautiful woman on his desk, but couldn’t place her. After a few minutes, he realized the picture was of Audrey. Soon, he won’t be able to remember anything that happened today or anything at all. He won’t even remember that he had a daughter who died in such a horrible fashion.

With four minutes left in the day, Jack pulls up to an abandoned construction sight with Belcheck. He walks toward a helicopter where armed men are holding Chloe. Jack orders them to let Chloe walk first before he’ll move. They comply. When Chloe and Jack meet in the middle, she tells him he doesn’t have to do this. He replies the it’s time for her to go home and she was right: Chloe is his best friend. He makes one last request for her to check in on his family when she can and the continues his walk toward the copter.

Jack warns the Russian that if he goes back on his word and harms Chloe or his family, Jack will tear his world apart. The Russian is taking Jack to Moscow and Jack gets into the helicopter without another word. From the ground Chloe and Belchek watch the helicopter take off. As the copter rises, the clock silently ticks down to 11 a.m. 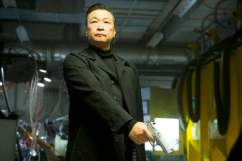