On tonight’s finale episode of Dancing With the Stars, the girl group Fifth Harmony is performs their song “Worth It” alongside the DWTS female dancers. They have also taken over the DWTS All Access footage on the show to reach out to fans and communicate with viewers.

Stay tuned during the show as we’ll be uploading the performance video as the group appears live tonight. 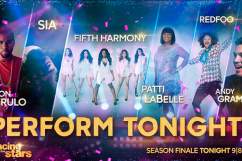 ‘Dancing With The Stars’ Finale 2015: Who Will Be the Winner?