Blac Chyna and Tyga have had a tumultuous relationship over the years. From dating each other, to dating members of the Kardashian family and appearing on their reality series Keeping Up With The Kardashians, the two have never been far apart in the public eye. Despite this, they’ve gone on to develop quite the bitterness towards one another, from throwing shade on social media or subliminally trying to outdo one another in their professional careers.

Blac Chyna and Tyga first met on October 5, 2011 at The F.A.M.E. Tour After Party, which was thrown by R&B singer Chris Brown. The two reportedly hit it off right away, and Tyga cast her as the lead in his subsequent music video for “Rack City,” which would go on to become a Top 10 hit on the Billboard Hot 100. The two officially became a couple on November 9, 2011, and detailed their burgeoning romance the following year in Urban Ink Magazine. Tyga even told the publication that he was interested in taking things further with Chyna, who, up to this point, had made her living as a stripper.

Chyna would become a familiar face for rap fans during this time, as she appeared in the music videos for Kanye West’s “Monster,” Nicki Minaj’s “Come on a Cone,” and was lyrically referenced by artists such as Minaj and Drake, who were labelmates of Tyga on Young Money Records.

Blac Chyna and Tyga welcomed their first child together on October 16, 2012. The rapper (born Micheal Ray Stevenson) tweeted to commemorate the birth, writing “Most amazing feeling ever,” with the hashtag #KingCairo in reference to the child’s name. Chyna followed suit and put up a post with caption “Welcome King Cairo Stevenson 7lbs 1 oz ……. #blessed !!!!” Both parents would subsequently get tattoos of their son’s name.

According to Rap-Up, Tyga celebrated his son’s birth by buying a “$6.5 million mansion with 7 bedrooms, 8 baths, a movie theater, pool, spa, waterfall, sports court, and gym” in Calabasas, California. Celebrities that reportedly frequented the mansion during this period include Drake, Travis Scott, and Justin Bieber among many others.

After more than two years together, Blac Chyna and Tyga called it quits. According to Us Weekly, the couple “have the cutest little boy, so they are trying to keep it amicable. They also have a lot of friends in common — Tyga is Kanye [West’s] boy and Blac Chyna got close to [his wife] Kim [Kardashian] — so they don’t want to make it weird.” Tyga would subsequently discuss the breakup with Vibe magazine, where he said that “We decided to take a break and do what’s best for King at this moment. We decided to take a break apart ‘cause you don’t wanna raise an emotionally unstable child, and that’s what it comes down to. It wasn’t my happiness, and it wasn’t her happiness. It was for the sake of King.”

“I mean, of course I love her. I had a kid with her for a reason. We were together for two years, but sometimes people need to see what life really is without the other person. [They need to experience life] without Prince Charming and really learn responsibility,” he said.

Not long after his split from Chyna, Tyga began dating reality TV star Kylie Jenner. The relationship turned several heads in Hollywood, as Jenner was underage at the time, and the sibling of Rob Kardashian, whom Chyna would go on to have a child with in 2016. In an interview with Us Weekly, Kim Kardashian revealed that Chyna was very much saddened by this relationship with Jenner, saying “I understand that Kylie dating Tyga completely broke Chyna’s heart. I feel for her in that situation. Was it uncomfortable for me when Kylie and Tyga started to date? Absolutely, because Chyna was my friend. But I had no choice but to take my sister’s side.”

Khloé Kardashian took a lighter approach to the situation when she appeared on Jimmy Kimmel and was asked about it. She laughed it off and commented that “It’s fun! It’s, like, really fun this way. It makes, I think, our holidays a little more concise.”

The latest development in the Blac Chyna and Tyga story came on Wednesday morning. The former took to Snapchat to air out her frustrations toward Tyga, calling him a series of increasingly disrespectful names and claiming that he didn’t pay child support for their son. “It’s funny now to me !!! But when Tyga and side n***a kicked me out !!! And they wanted to see me fail ! lol… And 2 grind from the dirt !!!!! No child support!”

Chyna would go on to say “N**** is like hoes ! So imma treat u like that ! Not paying Jenny ! Wow…Stop running to ur money ! Telling my business about King ! I bet any money ! I got more money then ur account Tyga , Michael ! !!!” Tyga has yet to respond to the savage takedown, but based on reaction of fans online, its obvious that him and Blac Chyna’s relationship is far from over. 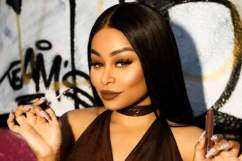