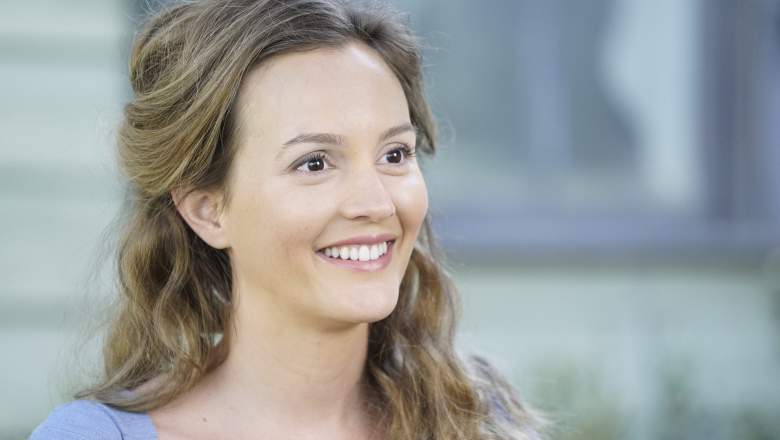 Although it seemed like the pilot for Making History would set up the show to run on two separate tracks, it turns out it won’t be. Dan (Adam Pally) only stayed in the future with Deborah Revere (Leighton Meester) for a few seconds. When they learned that his friend, history professor Chris (Yassir Lester), is killed during the American Revolution, Dan feels the need to help.

In episode two, “The Shot Heard Round The World,” it’s up to Chris to start the Battle of Lexington.

Here’s a look at the action in episode two.

How The Peppermint Patty Changed America

The episode kicks off with vomit. Yes, as we saw in the pilot, everything stinks in 1775. Chris storms into the bar to find Sam Adams and John Hancock drinking early in the morning. (It’s 5:00 somewhere, even in the past.) He wants to get them excited again about fighting the British, but they’re still focused on “Show me the money.”

“It sounds like you’re trying to say something important,” John says.

But Sam and John tell him that since he’s not wearing a wig, it doesn’t “feel” important. They tell him he looks like a baby mouse because he doesn’t have any hair. Moments later at a meeting hall, Chris – complete with a wig now – finally gets everyone’s attention.

Later, Dan and Deborah arrive in the past. They only stayed in the past for a few seconds before they went back to the past. It turns out that Dan couldn’t bear to walk by that memorial statue of Chris everyday. The eyes in that statue were “pure nightmare fuel.” At least Deborah saw enough to be impressed with the future. She saw a Peppermint Patty wrapper, after all!

Back in the meeting hall, Chris tries to teach the citizens of Lexington all about the meaning of a revolution. Paul Revere things it’s something you should do if someone hurts you. So, Chris agrees and tells them that the British hurt Revere by killing his daughter. This gets Revere riled up, but when Chris tells him it was Deborah who was killed, he’s surprisingly OK with it.

Chris is really bummed out by their lack of enthusiasm about a revolution. Revere suggests they form a committee to consider a revolution in a fortnight. Unfortunately, John and Sam have a packed schedule. So, Revere agrees to meet in a year from now! That’s way too late for Chris. This revolution has to get started on time or Hamilton might never get written. “Don’t be nasty, Chris,” John tells him.

“I will die for my right to kill others while defending myself,” Revere says.

They decide to forgo the committee and have a revolt now. But Dan has terrible timing for a time-traveler. He shows up with a living, breathing Deborah. So, the angry mob turns on Chris and starts throwing vegetable at him. “I have to stop trusting wigs,” one guy says. 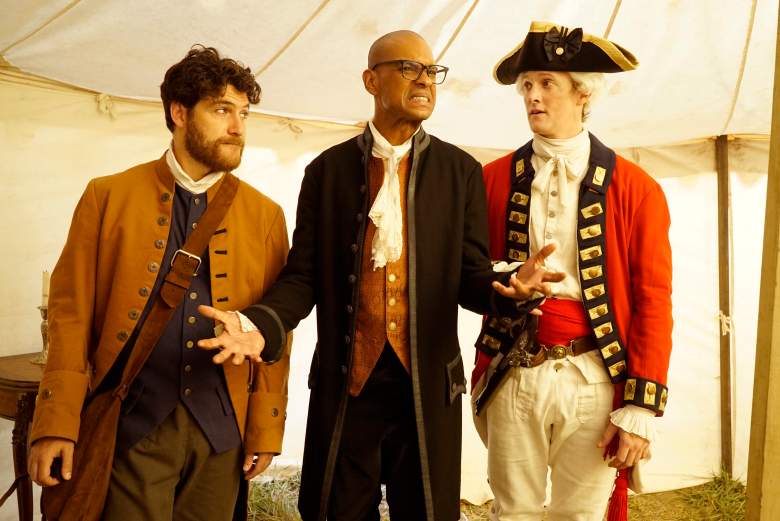 When Revere approaches his daughter, he says it’s nice to see her alive, then hands her his laundry to do. Chris is really upset that they showed up at all, since they interrupted his perfect plans. Dan shows Chris a picture of the statue, which shows that he died the day after the Battle of Lexington. “You choke on a walnut,” Dan tells him.

Outside the stable, Chris explains where the British are in relation to the American colonists. Dan suggests they write a letter to George Washington, but Chris insists that the best thing Dan can do is stop helping. “What? Where do I fit? I’ve got so much to offer this team,” Dan says. “A ton of heart. An abundance of skill. And when the battle is going, I’m a full-blown beserker.”

Deborah interrupts, telling them that she refuses to do her father’s laundry. She was so inspired by the idea of a Peppermint Patty – with its delicious mix of chocolate and mint – was so inspiring. They must start this revolution on time so the women of the future can definitely feel the freedom she felt just during her brief moments in the future.

Getting Up. Super. Early.

After the break, Dan continues to remind Chris that he saved his life. He’s also a little disappointed that the big plan doesn’t seem to involve the “beserker.” Chris tells him that his role will just be not to talk at all when they get captured. And as if on cue, they get caught.

At the British military camp, they are taken into the main tent. Chris tells the commander, Colonel Smith (Jamie Harris) that he is a lieutenant colonel and they are honored to be there. Dan tells them that he’s Jason Bourne. (Matt Damon would disagree.) When asked how they knew where to find the camp, Chris tells Smith that they are working for General Thomas Gage and he sent them to report to the camp. Smith is surprised, but is very interested in them after Chris tells him about the colonists’ guns. “Oh my god, what is their obsession with guns?” Smith says.

At first, Smith says he doesn’t want to take their guns, but them having so many makes him feel like they must take them away. He also ignores a trooper’s suggestion that there be a waiting period. But Smith starts getting suspicious of the two – after all, they aren’t speaking with accents. “That’s because we’ve gone so deep undercover, we’ve forgotten our accents,” Dan says. “The only thing I do now… I’m a human weapon.”

The trooper, named Davy (Ross Philips), puts his total faith in Chris and Dan for some reason, and this convinces Smith that the two are on the level. He tells them that they will march on Lexington and it will be “Super. Early.” 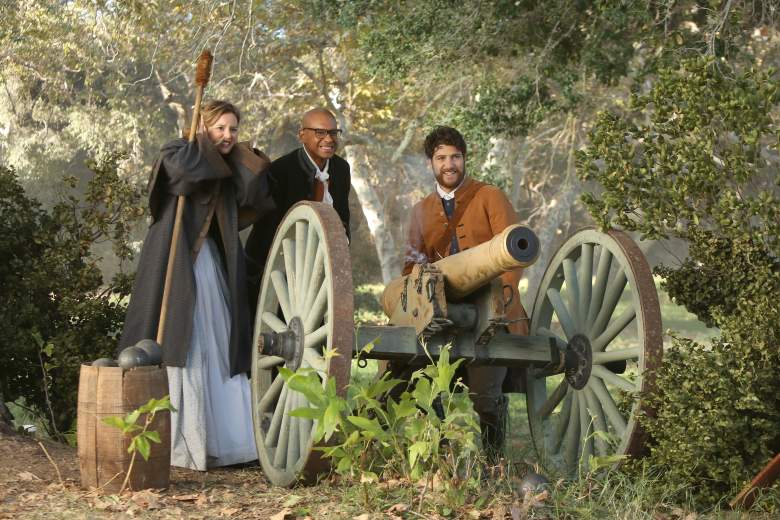 Meanwhile, Deborah is going on the Midnight Ride her father was supposed to do before. “The British are coming and they want to take your guns!” Everyone believes her, because she looks just like her father!

Back at the British camp, Davy and Chris are bonding over Chaucer and try to knock out Dan. “Nice try, but my doctor told me that I actually can’t get more concussions,” Dan says. Chris and Davy are “a couple of dorks,” which bores Dan.

In the morning, the British face off against the colonists. Chris is amazed that he’s going to see the moment America was born, but Dan is still half a sleep. He’s also a little disappointed that no one is shooting.

John and Smith have a yelling match across the field. They only have so many guns because they have to stop the British from taking them. But the British weren’t planning on taking them until they learned that the colonists had so many guns. “Then we were correct to have them,” John yells. Davy suggests that they introduce gun regulations as a compromise. “I don’t want to have this conversation in front of the guns,” Sam says.

Chris then realizes exactly what he has to do – fire the shot heard round the world. Dan wants to do it and the two struggle, so the gun goes off anyway. It really kick-starts the battle. Chris and Dan argue over who really shot it. It was Chris, Deborah determines.

The Shot Heard Round The World

Although the battle has started, Chris realizes that something is going wrong. The British are winning! “This is Chris’ fault, 100 percent,” Dan says. But Dan comes up with an idea that could actually work. If they can convince the Americans to retreat and then force the British into the barn full of explosives, they can blow up the barn with the British inside. Deborah doesn’t think they can convince Bostonians to admit defeat, but Dan has confidence.

“Well, I’m a Bostonian too and the only thing worse than dying and losing would be not dying and then winning, and that’s what I intend to never happen to me,” Dan says.

Dan then runs into the middle of the battle, waving a white flag and calling time-out. He tells everyone to retreat because they are going to die. Since Dan is screaming so loudly, they think the British must have an incredible force to make a man scream so much. They agree to retreat and the British notice that Dan is the one yelling at the colonists. 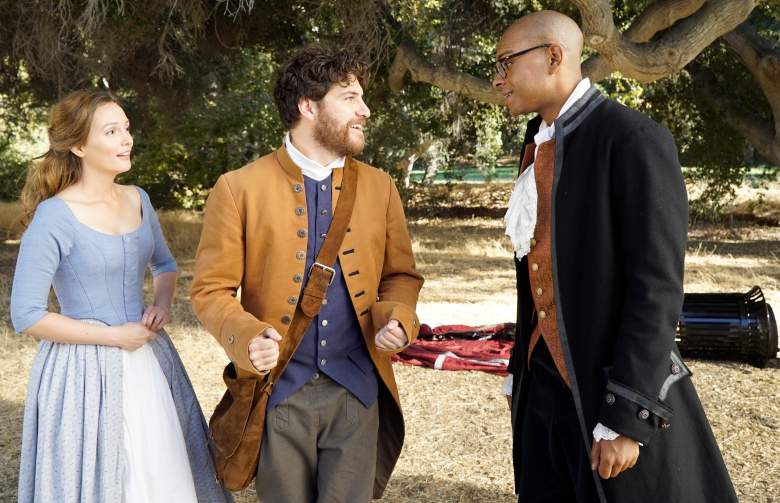 Later, the colonists start celebrating and decide that this was a great way to start a revolution. “And if we are to form a new nation, we must guarantee unrestricted gun access for all!” John says.

Deborah shows up wearing her father’s hat and coat. She reveals that it was really a woman who led them into battle! They are stunned and Rever is not happy. “Obviously, that won’t do. Everyone say, I did it!” Then everyone starts cheering for Paul Revere. Dan thinks that Deborah shouldn’t care what these tools think, but she finally stands up for herself.

“Father, you are a liar! And a tool,” she tells Revere.

He tells her to get back to work at their house, but she refuses. “Wash your own damn clothes,” she says. “It’s this generation. They are just so selfish,” John says, as they all shrug it off.

Dan tells Deborah she’s amazing for standing up to her father. She tells him he’s amazing for not being afraid to show his true feelings. “How’d you like to be ashamed of me in the future?” Dan says. “I’d love that.”

The episode ends in the present, with all three arriving in the time machine. To make sure the American Revolution really happened, Dan asks a dude wearing a Patriots shirt what he thinks about the British. “Who cares? It’s America you bitch,” the guy says as he walks away.

Deborah tells Chris that she’s sorry about Davy’s death. It got pretty dark back there. Chris thanks the couple for letting him come along for the adventure. As Chris walks away, Dan tells him, “I love you!” Chris brushes him off and walks away.

Now that she’s in the future, the first thing Deborah wants to do is ride a ghost to the center of the earth. “I’ll do you one better. Do you know what pizza is?” At the very end, Deborah asks what they will do about the time machine. Dan says because it’s a bag, they can be careless with it.

The next episode of Making History is “The Boyfriend Experience,” which airs on March 19. “Deborah questions her relationship with Dan upon realizing he may not be such a thrilling inventor,” reads the episode description. It looks like the show will be setting up individual time travel trips for each episode, where the trio have to set things straight. 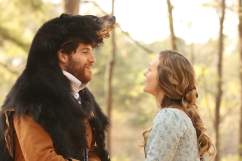 Read More
FOX, TV
In the new episode of Making History, Dan and Deborah join Chris to make sure the Battle of Lexington starts on time.