After dealing with a dangerous self-defense instructor in Fatal Defense, actress Ashley Scott faces a dangerous manny in the new Lifetime movie Manny Dearest. The movie debuts on Saturday, April 29, 2017 at 8 p.m. ET.

In the film, which was previously called Stranger With My Kids, Scott plays a single mom named Karen Clark who needs some help taking care of her two young sons. One day, she decides to hire a male nanny named Alex Stanley. He also wants his own family, but rather than trying to adopt or find a special person to start one with, he wants to commit murder. Karen now has to save herself and her two sons from Alex. The film was directed by Chad Krowchuk (Undercover Wife), with a screenplay by Bryan Dick and story by Daniel West & Ken Sanders.

Scott is best known for her roles in the cult CBS Series Jericho, the Steven Spielberg movie A.I.: Artificial Intelligence and Into The Blue with Jessica Alba. She also played Mary Newhouse on Lifetime's UnREAL series. Her recent TV movie credits include Holiday Road Trip, The Nightmare Nanny and The Perfect Boyfriend. Click through to meet the rest of the cast and characters from Manny Dearest. (Getty) 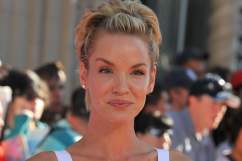 Read More
Lifetime, TV
Ashley Scott leads the cast of Manny Dearest, a new Lifetime movie airing this weekend. Meet the rest of the cast of the thriller.