JJ Feild and Neve Campbell have been together since 2012, and are as strong as ever. Tonight, the House of Cards star will appear on Watch What Happens Live, and her presence on the small screen will certainly have fans wondering about her relationship with Feild.

Read on to learn more about the couple:

1. Feild & Campbell Have One Son Together

Neve Campbell and JJ Feild attend the launch of Project Ocean at Selfridges.

In 2012, Campbell and Feild welcomed their first son, Caspian. Speaking to People the summer after his birth, Campbell said, “He’s talking a lot more now… The word of choice is no right now. There’s so much that’s so beautiful. Waking up to him every morning with that smile and innocence and creative energy is beautiful.”

Why the name Caspian? Speaking on The Talk after his birth, The Daily Mail reports Campbell as saying, “I liked the idea of a unique name. It’s nice having something special and different and so I wanted something like that for our son.”

2. Feild Was in ‘Captain America: The First Avenger’

Actors J.J. Feild (R) and Neve Campbell arrive at the premiere of ‘Austenland’.

Feild is a British-American actor and has appeared in a number of film and television roles. In 2011, he co-starred in Captain America: The First Avenger, and later that same year, he acted alongside Benedict Cumberbatch in Third Star.

His other notable credits include The Musketeers in 2014, Turn: Washington’s Spies, Last Orders, K-19: The Widowmaker, To the Ends of the Earth, and Not Safe for Work, among others.

On television, he’s appeared on Six Degrees of Separation, Ring Round the Moon, and The Pride.

3. There Were Rumors Campbell and Feild Were Expecting Another Child in 2014

In 2014, rumors surfaced that Campbell and Feild were expecting a second child together. A source allegedly told US Weekly, “They’ve always wanted more than one child. They want Caspian to have a sibling.”

The actress’s rep, however, quickly turned down the rumors, telling People that they were false.

In their downtime, the couple enjoys watching TV together.

In a May interview with Parade, Campbell was asked if there’s something she enjoys binge watching. She said:

At the moment, JJ Feild, my partner, and I are binge watching the original Twin Peaks again in order to get back in the mood because we’re so excited about the new one. 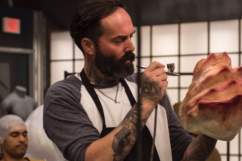 ‘Face Off’, Syfy: Meet the Cast

In an interview with the network about his involvement in the show and the character he plays, he discussed the fact that he was born in the US and raised in the UK.

I was educated in the U.K., which means that I learned precisely zero about the American Revolution growing up. We study a lot of history in the British education system and you can pick different subjects. One of the subjects that I picked was the history of the Native American, but we could not pick the occupation of America by the British.

Asked if he admires his character, as George Washington and other Patriots supposedly did, Andre said that he does admire him. “I very much admire him. The fact that he’s buried in Westminster Abbey, which is where kings and queens are buried, means he was a great hero to the British. Eyewitnesses said that some people wept when he was hung, and Washington wrote very highly of him. What that tells me is that not all British were ‘bad.'”

5. Campbell Has Been Married Twice Before

JJ Feild and Neve Campbel at the ‘Austenland’ premiere.

Light is an English actor who starred as Henry Lennox (along with Richard Armitage and Daniela Denby-Ashe) in BBC’s North and South. In My Son John, he played the lead character– the son of Rudyard Kiping.