Robert De Niro is a nominee at the 2017 Emmy Awards and he most likely will have his wife Grace Hightower at his side. Prior to meeting Hightower and marrying her in 1997, De Niro was married to Diahnne Abbott from 1976 to 1988. Abbott is an actress and singer, who appeared in De Niro’s movie Taxi Driver. De Niro and Abbott had one son together, named Raphael. He was named after the hotel in Rome where he was conceived and De Niro also adopted Drena, who is Abbott’s daughter from a previous marriage. Drena De Niro has actually appeared in several of her father’s movies, including Wag the Dog, City by the Sea and The Intern.

As for De Niro’s current wife, Grace Hightower, she is also an actress and singer, as well as a socialite. Hightower has had minor roles in movies including The Paperboy and Precious.

When Hightower was working at a Mr. Chow restaurant in London, England, she met De Niro, who was dining at the restaurant. The couple has two children together. Their son was born a year after the couple married and their second child was born via surrogate in 2011. Over the years, the couple’s ups and downs have been made very public. In fact, De Niro actually filed for divorce in 1999 and sued Hightower for custody of their son in 2001. Fortunately for the couple, the two got back together.

I wouldn’t have to keep making shitty movies if you didn’t spend all my money!

When a rep of De Niro’s was reached by Page Six, the rep’s response was this:

Your story is based on something that never happened from a source who has an ax to grind.

Grace is so honored to be a part of this year's Ernesto Illy International Award! An initiative which celebrates and recognizes top quality coffee growers, supports improvements in coffee sustainability and emphasizes the importance of working together with the coffee growers. @illy_coffee 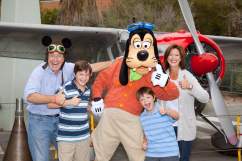