The National Christmas Tree Lighting took place on November 30, but it’s being broadcast on TV for the first time tonight on the Hallmark channel. The ceremony has already gotten a lot of media attention, however, because of a photo a reporter tweeted before the ceremony showing empty seats. Steve Rudin of ABC7 was at the event and shared a photo to show how many people weren’t there. But other reporters disagreed, saying there were always empty seats at these ceremonies. Here are some photos to compare the crowd size between President Donald Trump’s first tree lighting ceremony and some of President Barack Obama’s tree lighting ceremonies. An official attendance count for the events hasn’t been released, but the National Park Service said that 12,000 to 15,000 people attend the ceremony every year.

Here’s the original tweet that caused people to start talking about the crowd size. The event was starting at 4:30 p.m. Some people said the timestamp on the tweet showed 3 p.m. for them, but here it shows 5 p.m. The reporter said that it was already dark when he took the photo, and the tree lighting ceremony didn’t start until it was dark:

The National Tree Lighting ceremony was beautiful this evening – but hard not to notice the empty seats. #Christmas #DMV #USA pic.twitter.com/oKMrnnBekG

However, reporter Lauren DeMarco for Fox 5 was quick to point out that there were empty seats at former President Barack Obama’s tree lighting ceremony in 2015. She said that this often happens because they have to guess how many people who get tickets through the lottery will actually show up:

Yes but I think this typically happens. They have to guess at how many of the people who got tix through the lottery will actually show up. Our photographer took this when I covered the #NCTL two years ago @fox5dc pic.twitter.com/lHXTYLT8py

The National Park Service confirmed this with Fox 2, saying no-shows are common for the tree lighting ceremonies because tickets are given to people all around the country. Someone else tweeted that their friend was at the Trump tree lighting ceremony and said it was packed, and other photos showed people standing in the standing room section behind the empty seats.

Friends were there and said it was packed. Stick to the weather @SteveRudinABC7 instead of passive-agressive attempts at division in the DMV pic.twitter.com/NZKf3GxJMn

Photos of the Crowd at Trump’s Tree Lighting Ceremony

Here are photos, including the crowd, at Trump’s tree lighting ceremony as provided by Getty:

What do you think of Trump’s Christmas Tree Lighting vs. Obama’s? Let us know in the comments below. 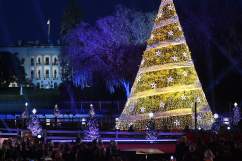 National Christmas Tree Lighting 2017: What Time & Channel Is It Tonight?