Legendary actor Burt Reynolds has died at the age of 82. Reynolds was best known for his action and comedy films in the 1970s, but he starred in several other films right up to his death. So what were his last roles, and does he have any unreleased films on the way?

The last film that Reynolds starred in was 2017’s The Last Movie Star. The story follows an aging star, played by Reynolds, who gets lured into accepting an award at a film festival in Nashville. The Last Movie Star was written with the late actor in mind, and footage of the character during his prime was taken from real-life Reynolds films.

In an interview with USA Today, Reynolds about the parallels between the character and his own personal life. “I really didn’t know how personal it was until I started making it,” he said. “There were moments where I thought, ‘Wait a minute, this is me.’ He’s lost his wife and I’ve lost my girl. We’re just two old farts at the bar drinking and telling lies. It’s pathetic and it’s also very funny when you look at it like that. And that’s how we choose to look at it.”

Reynolds also made it clear that he had no plans of slowing down. “I still haven’t done the best work I can do. I hope I get the chance,” he revealed. “But I’m at an age where it’s very difficult to be offered great roles. It’s a tough business. Very tough. But I always tried to leave a good impression wherever we shot, and I didn’t leave any buildings burning or anything. And I’ve had a good time through it all.”

Before his death, Reynolds was set to appear in Quentin Tarantino’s Once Upon a Time In Hollywood. The film, which is set against the backdrop of Los Angeles circa 1969, would have seen Reynolds act opposite the likes of Leonardo DiCaprio, Brad Pitt, Margot Robbie, Kurt Russell and Al Pacino. Production started earlier this summer, but Variety confirmed that Reynolds wasn’t expected to film his part until the end of September.

Neither Sony Pictures nor Tarantino have commented on who will replace Reynolds. It’s rumored that he would have played George Spahn, the elderly rancher who famously allowed Charles Manson and his family to live on his California farm. In her official statement, Reynolds’ niece Nancy Lee Hess said that he was looking forward to the role. “My uncle was looking forward to working with Quentin Tarantino,” she wrote, “And the amazing cast that was assembled.”

Tarantino never worked with Reynolds, but he often spoke highly of the actor and the impact that he had on his life. “I’ve always been a big fan of his as an actor and a person and everything,” Tarantino said. “I was named after him actually… My mom had me when she was only 16, and Burt Reynolds at that time was on Gunsmoke and he played a half-breed Indian named Quint.”

“I’m 25% Indian, and she had a crush on him, and so she named me Quentin,” he added. “She was either gonna name me Burt or Quentin.” Listen to the full interview above. 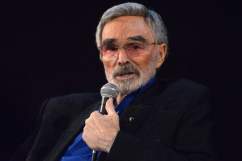 Burt Reynolds Net Worth: 5 Fast Facts You Need to Know