Youtube - Jennifer Lopez Emme and JLo perform on the "It's my Party" tour.

Emme Maribel Muñiz is set to join her mother, Jennifer Lopez, on stage during the 2020 Super Bowl halftime show. She is one of three known guest performers that will be taking the stage at the event, and she has previously sung on the stage with her mom.

Lopez has been preparing for her Super Bowl performance all week, and Emme has been joining her on set for downtime between rehearsals. It was announced Saturday night that Emme would be taking the stage alongside her mother and Shakira during the big show.

The Super Bowl halftime show will be watched by millions of people, and 11-year-old Emme will be sure to steal at least part of the show.

Emme was born to Jennifer Lopez and Marc Anthony in 2008. The couple got married in 2004 in a secret ceremony at Lopez’s home. They separated in 2011. Emme has a twin brother, Max.

Lopez and Anthony also support each other and team up to work together. They appeared together on screen in Lopez’s single “Nu Tú Ni Yo.” For Father’s Day in 2019, Lopez paid tribute to Anthony on Instagram.

“Happy Fathers Day to you Flaco!!! Emme and Max love you sooo much!! Thank you for these two beautiful coconuts!” She included a photo of Anthony and a photo of Rodriguez in her post.

Here is what we know about Emme’s singing voice:

Emme took the world by storm after her mother uploaded a video of her singing “If I Ain’t Got You” by Alicia Keys in early 2019. In the video, Emme walks into her mom’s rehearsal and J.Lo encouraged her to sing the song, asking “You do it in the original key, right?”

Emme was nervous at the beginning, but she gained confidence quickly when she locked eyes with her mom. After the song was over, her mom gave her a hug and applauded.

“We should have her come out and do something on tour!” Lopez exclaimed.

Later, when asked if Emme would be joining her on tour, Lopez said it was a lot of work and she worried about her daughter.

“And it’s a lot of scrutiny and you really put yourself out there in a way,” she explained. “And now, in this age of social media, where people can be so brutal and mean at times, I don’t want her to put herself any more out there than she is.”

She continued on to say that Emme would do the tour if she wanted to since that’s what she loves.

In May 2019, Lopez told Entertainment Tonight that Emme caught the singing bug from a very young age.

“It’s natural,” she said. “Emme could always sing. I remember when she was in the crib, when she was a baby, she used to be humming, like, really humming to herself.”

She went on to say that she thought Emme was singing, and Emme’s father, Marc Anthony, agreed. Lopez said Emme has Anthony’s voice and “She’s amazing.” 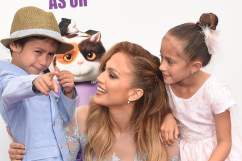 She Joined Lopez on Tour

In June 2019, Emme joined her mother on stage to help kick off the “It’s My Party” tour. She took the stage in front of 20,000 screaming fans to perform “Limitless” with her mom. She then joined her mom at each stop of the tour to sing the song.

In a six-minute YouTube video, Emme opens up about what it was like to be on tour with her mom. She said she’s been in plays before and been on stage, but it was nothing like being on the stage on tour. She also said she liked rehearsing and looking behind her to see which backup dancer was behind her on stage.

She said she doesn’t like getting her hair and makeup done before going out on stage.

“Usually, the light’s too bright in my eyes, so I can’t see anybody, so that’s good,” she said. “So I just look at mom.”

Later in the video, she says that it feels like she’s accomplished something when she sees all the people cheering her on.

While she doesn’t sing in the video, Emme also starred in Lopez’s music video for “Limitless.”

Read More
Celebrities, Jennifer Lopez
Jennifer Lopez is one of two Super Bowl halftime headlining acts, and she is set to be joined by her 11-year-old daughter, Emme Maribel Muniz, during the show.