The Making of Longshot in Madden NFL 18Check out an exclusive look at the making of Madden NFL's first-ever cinematic and playable story mode, Longshot. In Longshot, your decisions lead forgotten prospect, Devin Wade, on the pursuit to hear his name called on NFL Draft day. Learn more: http://x.ea.com/32046. Pre-order the G.O.A.T Edition and play Longshot three-days early. Available on PS4 and…2017-08-16T14:15:52.000Z

There is a reason playing Madden’s Longshot Story Mode feels like a movie. There were actual actors and actresses who were motion captured to play the role of the characters in the story.

Some of the actors include Oscar winner Mahershala Ali and Scott Porter of Friday Night Light’s fame. The best way to understand Longshot is as a playable movie where your choices have an impact on what happens next.

The user controls Devin Wade as he looks to make it into the NFL. Wade is joined frequently by high school teammate and best friend Colt Cruise. The plot gets more interesting from there, but we don’t want to spoil it for you.

Rather than spoil some of the star cameos, we have only listed the actors and actresses that do not play themselves in Longshot.

Here’s a rundown of the top Madden 18 Longshot cast members.

J.R. Lemon plays Longshot’s lead character Devin Wade. Users play as Wade as he looks to fulfill his NFL dreams. According to EA Sports, Lemon played running back for Stanford from 2001 to 2005. Lemon also made a brief NFL cameo for the Oakland Raiders in 2006.

Aside from Madden 18, Lemon most recently played Nurse Kenny Fournette in the NBC show The Night Shift. He also made appearances in several other shows/movies including A Madea Christmas and Hawaii Five-O.

GettyScott Porter is well known to many football fans from his time on the hit show Friday Night Lights.

Colt Cruise serves as Wade’s best friend in the game as well as the comic relief. Friday Night Lights fans will remember Porter as Jason Street. According to IMDB, his other cameos have included Music and Lyrics, Hart of Dixie, Guardians of the Galaxy (video game), Ultimate Spider Man (TV), Rosewood, Robot Chicken and The Good Wife.

Jack Ford serves as Wade’s coach as he attempts to make the NFL. According to EA Sports, Rus Blackwell, who plays Ford, has over 50 credits over his acting career. That said, Blackwell will have you believing he is a real NFL coach in Madden 18. According to IMDB, his cameos include Banshee, Battle LA, The Curious Case of Benjamin Button, Six and Homeland.

Assassin – Marem Hassler Discusses #BecomingJane and Tactical TrainingHelp make this film happen! We're currently looking for your support to make Assassin, part two of the LAX trilogy, a reality. Find out more at: http://bitly.com/assassinlax #assassinlax #supportindiefilm Jane is an assassin. While hiding out in the San Bernardino Mountains, she meets and falls in love with a local woman named Ella. As the…2014-11-10T17:40:49.000Z

Without spoiling too much, Julia is part of the agency that Wade interacts with during the game. Actress Marem Hassler may look familiar to gamers as she also made an appearance in Lara Croft Tomb Raiders: The Cradle of Life. According to US Gamer, Hassler makes history as the first prominent female to be featured in a Madden game.

According to IMDB, Hassler has also appeared in The Bold and the Beautiful, Duo and Bone Tomahawk.

Fans will likely have a strong reaction to Ross Fountain in the game. Fountain plays the role of a television producer in Madden 18. Ricky Wayne, who plays Fountain, has also starred in Bloodline, House of Bones, The Walking Dead and Outsiders.

GettyMahershala Ali pictured with his Oscar award for his role in Moonlight.

Fresh off his Oscar-winning performance in Moonlight, Ali is the first face we see in Longshot. Ali plays Devin Wade’s father, Cutter Wade. In addition to Moonlight, Ali has played in House of Cards, Luke Cage and The Curious Case of Benjamin Button. Cutter Wade plays a critical role throughout the Longshot story. 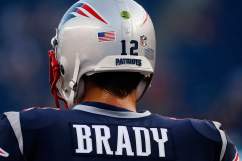 Madden 18 Release Date: What Time Can You Download the G.O.A.T. Edition of Game?