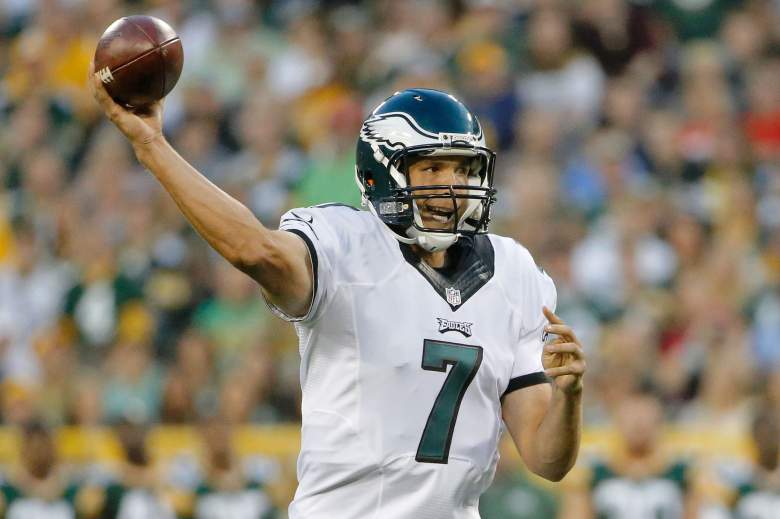 Sam Bradford of the Philadelphia Eagles passes the ball against the Green Bay Packers during the first quarter of a preseason game at Lambeau Field on August 29. (Getty)

A new year means a new look for two of the NFL’s avian-themed franchises.

In the first of two Monday night contests on ESPN’s lineup, the Falcons host the Eagles at the Georgia Dome at 7 p.m. ET on ESPN.

ESPN, as excited as any rabid fan is for the upcoming season, will have a two-hour Monday Night Countdown beginning at 5 p.m.

Both teams are chock-full of compelling story lines. Sam Bradford will take the field for the first time since he started for the Rams in 2013 and tore his ACL. Longtime NFC stalwart DeMarco Murray will make his debut for Philadelphia after coming over from the rival Dallas Cowboys in the offseason. And now that the Eagles have decided to part ways with Tim Tebow, Philly can finally focus on the battle between its top-two signal callers. Mark Sanchez awaits in the wings to take over at any moment for Bradford, if deemed necessary by Eagles coach Chip Kelly.

The Falcons have a new head coach, Dan Quinn. Quinn, who made his bones as the defensive coordinator in Seattle over its last two dominating seasons, has brought a rough-and-tumble defensive mindset that should take some pressure off of the offense. That could mean huge seasons for quarterback Matt Ryan and wide receiver Julio Jones.

Who:
Eagles vs. Falcons