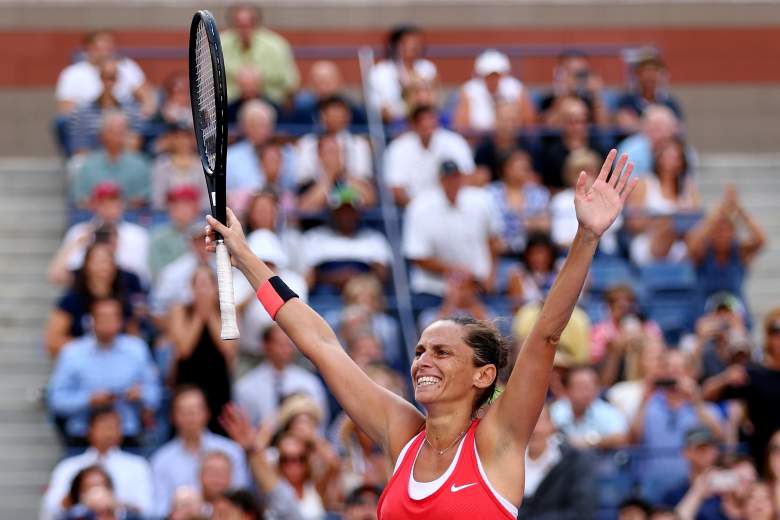 Roberta Vinci celebrates after defeating No. 1 Serena Williams in the US Open semifinals and securing her spot in the championship on Friday. (Getty)

It’s an all Italian matchup in a 2015 US Open championship that no one quite expected.

Roberta Vinci, fresh off her upset over top-ranked Serena Wiliams, will square off against No. 26 Flavia Pennetta on Saturday afternoon. Both women are competing in their Grand Slam championship debuts.

Vinci, currently ranked No. 43 in the world, staged one of the most improbable victories in recent sports history to earn her spot in the championship match. The odds were not exactly on her side:

Coming in, unseeded players were 1-43 vs Serena at the U.S. Open. Today, a 300-1 shot to win the title pulled it off. pic.twitter.com/hDW05httAo

Vinci was relentless though, attacking Williams after dropping the first set and keeping the world No. 1 off-balance. The 32-year-old Vinci, who had never won a set against Williams in their first four matches, finished 2-6, 6-4, 6-4 on Friday afternoon. She said after the match, “This is like a dream. I beat Serena, I’m in a Grand Slam final. It’s the best moment of my life.” Check out her post-match interview:

No. 26 Pennetta, meanwhile, was nothing short of dominant in her semifinal match, defeating No. 2 seed Simona Halep in straight 6-1, 6-3 sets. She won 15 straight points after trailing 3-1 in the second set and recorded 18 of the final 20 points of the match.

“I mean, it’s amazing,” Pennetta said after the match. “I didn’t think [I’d] be so far into the tournament. … I didn’t know how [I’d] handle the pressure I had.”

The 2015 US Open women’s final will be broadcast on ESPN on Saturday at 3 p.m. ET. It can be streamed on the WatchESPN app as well.

Read More
Tennis, US Open 2015
It's a battle of Italian underdogs in Flushing. Here's how to watch the two square off in the 2015 US Open championship.