USWNT has qualified for five straight Olympic Games, and their latest pursuit sees them square off against Mexico on Saturday. Jill Ellis’ squad have scored a pair of 5-0 victories already this year, and three days ago treated fans to several highlights.

Alex Morgan got the scoring started just 12 seconds into the match, firing a low shot after controlling a header from teammate Carli Lloyd. Morgan would add another in the second half, but it was Christen Press who scored the goal that went viral.

It’s hard to top a 12-second goal, but the first touch by Press was almost too quick for cameras. Press scored USWNT’s first goal of their World Cup run, but was otherwise used sparingly in the tournament. Press’ play demands more time in an already crowded front, even with Sydney LeRoux out of the picture. 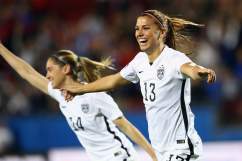 U.S. Women vs. Mexico: How to Watch Live Stream Online