Here's the #UFC211 broadcast schedule for everyone in the UK and Ireland. It should be a good one. pic.twitter.com/qa9T2I8Xmh

Stipe Miocic retained his UFC Heavyweight Title in spectacular fashion, with a heavy straight right hand that sent dos Santos to his knees at 2:22 of the first round. The champ followed up with a flurry of punches before referee Herb Dean made the call.

Joanna Jedrzejczyk retained her women’s strawweight title against Jessica Andrade in a lopsided but entertaining five-round decision. The two women traded kicks early on, before Andrade took the advantage punching. Both women traded powerful shots but Andrade was able to take the champion down with powerful shots in the first round. The champion fought smart and stayed to the outside in later rounds, while Andrade plodded forward, eating multiple head kicks and other well-placed strikes, appearing mostly unfazed.

The savvy Brazilian Jiu Jitsu legend Maia took his opponent’s back early in the first round, and did so midway through both the second and third rounds, while Masvidal appeared to do more damage with his striking. Two of the judges scored the fight 29-28 for Maia.

The proven veteran Edgar took the flashy striker Rodriguez to the ground and battered him in dominant fashion. Due to immense swelling on Rodriguez’s left eye, the fight was stopped on the doctor’s advice.

David Branch outscored his opponent, according to two of three judges at ringside in an uneventful tilt that saw the Dallas crowd grow restless on more than one occason.

Referee Herb Dean declared the bout a no-contest at 4:12 of the second round after Alvarez landed a series of illegal knees he deemed to be an accidental foul. The first knee would have been legal under the new unified rules, but the second strike was clearly illegal, with Poirier’s right knee clearly down. Both fighters had each other hurt in the second round, after an uneventful first.

Knight got the better of the striking in the first two rounds and landed a stiff right uppercut in the third frame to send Skelly sprawling to the mat. Knight pounced on his opponent, landing numerous strikes, and referee Jacob Montalvo stepped in at the 39-second mark, perhaps a bit too late in the eyes of commentators Joe Rogan and Daniel Cormier.

Chase Sherman defeated Rashad Coulter via technical knockout 3:36 of the second round. Sherman came out with a kick-heavy offense, chopping the lead leg out from under his opponent and mixing in some head kicks with his punches. But Coulter was not going out easily, battling back in the second round, despite barely being able to stand. Coulter showed a ton of heart but finally went down, succumbing to a hard right elbow to the temple while pressed against the fence.

James Vick defeats Marco Polo Reyes via first round TKO at the 2:39 mark. “The Texecutioner” landed a flush right hand iat the end of a combination and sent his opponent to the mat, finishing him off with some ground-and-pound to improve to 11-1.

The fighters have arrived, the arena is packed and there are battles to be fought. It’s time for UFC 211, Miocic vs. Dos Santos II, live from the American Airlines Center in Dallas, Texas. Two belts are on the line during the pay-per-view main card, and mixed martial arts fans will soon see if the UFC heavyweight and women’s strawweight titles have been successfully defended or claimed by new masters.

The main card, available only on pay-per-view, features heavyweight champion Stipe Miocic squaring off against the No. 4-ranked fighter in the division, Junior dos Santos. Miocic looks to avenge a previous loss and Dos Santos is hoping to climb to the top of the mountain again.

Other fights on the main card include two potential No. 1 contender fights, the first at 170 lbs., between Demian Maia and Jorge Masvidal. There’s another matchup with title-shot implications in the featherweight bout between Frankie Edgar and Yair Rodriguez. The final fight of the main card features middleweight Krzysztof Jotko fighting David Branch in his return to the Octagon.

The UFC 211 prelims, airing on FX, feature a main-card caliber matchup in the lightweight bout between former champ Eddie Alvarez and No. 9-ranked Dustin Poirier. Chas Skelly and Jason Knight will square off at 145 pounds. That featherweight scrap is joined by a heavyweight fight between Chase Sherman and Rashad Coulter and a lightweight bout between James Vick and Marco Polo Reyes.

Check back here for live, up to the minute, updates and results. 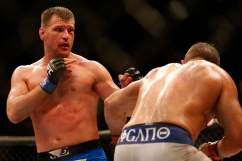