With just two games on NBA opening night, setting your FanDuel lineup can be a bit difficult. There is a narrow pool of players to choose from with just four teams in action.

Keep in mind if you are playing in a big tournament, you want to make sure your lineup has enough players that will have low ownership numbers. Our philosophy for tonight centers on the revenge game. The Cavs and Celtics matchup is full of story lines. The biggest one being Kyrie Irving squaring off against his old team.

We like Irving tonight as he looks to put it on his old team. Similarly, there is no way LeBron James is pleased with Irving requesting a trade out of Cleveland. James is battling an ankle injury, and his status is up in the air. You’ll want to monitor his status a few minutes before tip, but we do expect him to play. If so, we expect an angry James, which is good for DFS purposes.

There are also a few players making debuts for their new teams. Derrick Rose and Dwyane Wade will both debut in the Cavs starting lineup. Jayson Tatum makes his NBA debut tonight, and is expected to start against the Cavs. All three players are good plays tonight, especially Tatum who is only priced at $3,500. Look for that number to go up as his sample size starts to grow.

Here’s a look at my best lineup picks for NBA opening night. 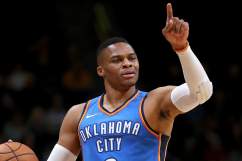