On last night’s episode of Glee, which returned after a brief hiatus, the kids are back with the usual drama. Find all the frenemy feuds here, and listen to the renditions of “Brave” and “I Believe in a Thing Called Love” to name just a few showstoppers.

At the beginning of the episode, Santana complained about her dead-end job as a waitress. Rachel surprised her by telling her she landed the cover of New York magazine, and invites her to come along to the shoot. At the shoot, the girls sing a rendition of “Brave” by Sara Bareilles. Listen here on the Wall Street Journal blog.

While Rachel is interviewing understudies, out comes Santana and nails the audition with “Don’t Rain On My Parade.” Listen here on Just Jared.

During a heated argument in their apartment, Rachel goes so far as to literally slap Santana in the face. As Santana agreed to move out, she got the call from the Funny Girl director that she won the understudy role. At rehearsals, the girls sing the fitting “Every Breath You Take” by The Police.

Later on, things get friendlier than expected. When Kurt takes a selfie of the pair, Elliot surprises him by planting a kiss of his cheek.

He posts the shot on social media, and Blaine, Kurt’s fiance, sees it.

At their weekly lunch, Tina confesses to Artie that she got waitlisted to her dream school, Brown University. Later, Sue Sylvester calls the pair into her office, revealing that they are tied for the coveted honor of valedictorian, with equal GPAs. Things got heated for the two, and when Artie called Tina, “the biggest b**** at McKinley,” things were officially on!

They sang a spunky version of En Vogue’s “My Lovin’ (You’re Never Gonna Get It)”, and when Tina, who got a little too into the music, pushes Artie into the stage and he topples over, she is shocked and upset.

With Sue as the judge, the two compete with speeches. Sue is disgusted when the both pull out of the competition.

4. Kurt Dances on a Stripper Pole to ‘I Believe in a Thing Called Love’

When Elliot takes Kurt to buy him a guitar, and at the shop, the boys rock out to “I Believe in a Thing Called Love.” Kurt gets into it, and uses the stripper pole to prove it.

Sue gives the valedictorian title to Blaine. Artie and Tina will be the salutatorians.

Blaine feels terrible, and offers an olive branch, allowing them to sing with him at graduation.

As a result, the trio sing Kelly Clarkson’s “Breakaway” on stage in preparation for the big day. 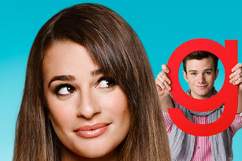