It’s the season 5 finale of Pretty Little Liars and our prayers may all be answered as “A” is said to be finally revealed. The episode is titled “Welcome To The Dollhouse” and the official synopsis reads: Shocking secrets come to light for Aria, Emily, Hanna and Spencer as the biggest clue to the “A” mystery is revealed. Executive producer Marlene King has dished that this episode will not only be shocking, it will be scary and demented, sure to break Twitter throughout the show. King teased the episode to Entertainment Tonight, revealing:

I can say that the entire episode, which is called, “Welcome to the Dollhouse,” was inspired by ‘A’s idea of playing with his dolls and in ‘A’s dollhouse. It gave us an interesting idea, and I will say that this episode is unlike anything you have ever seen — not just on Pretty Little Liars but on television period … It’s just balls out, and a really fun, new, and interesting direction for the show.

And, as far as the “Big A Reveal” goes, King states:

It is the biggest reveal we’ve ever given so far. In so many ways you will know who this person is, but I will just say there is a little bit more story left to tell after the episode — not a lot of story, but a little bit.

The girls discover who “A” is and bring the information to the viewers as King explains:

A certain character in this finale says something like, “Oh my God, ‘A’ has a soul.” That to me tells us yes we’re ramping up to the end of this story — but it’s not just pulling off the mask of ‘A’, it’s really finding out that ‘A’ is human too and ‘A’ has a soul like anyone else.

We knew that Mona was the original “A,” but we didn’t know how long we were going to be able to go to sustain that story before we gave her up to the audience. We knew there was going to be a “Big A” to follow that story up, and we stayed true to those characters. But along the way, we’ve fallen in love with characters who come and go. They’ve changed the course of a romantic relationship, or the course of the mystery along the way, and some of our red herrings. But we’ve always stayed true to who our “A”s are.

King also reveals that though all the girls find out who “A” is, it’s actually Spencer who finds out first, just before they do. TV Line also had some good spoilers about the finale, writing that:

The parents on the show, all of the parents, are about to find out some shocking news. It sends their course on the show into a new direction … Remember the final scene of last week’s episode, which found “A” playing with a set of dolls in prison garb? Remember how “A” appeared to separate one doll from the group — either Aria or Emily — and place it in a castle? King confirms that there’s “a significance” to that … King’s reluctance to discuss Andrew’s role in the finale speaks volumes. All she’s willing to say is, “He’s definitely in the finale, and he plays a large role in it.”

You’ll find out some big stuff. It [the finale] will be satisfying in the sense that we finally know who might be behind all of this, and who stole the game from Mona.

Goldstick also talks about Andrew’s role in the finale, explaining that:

He’s around a lot, so much so that you start to question what is going on with this dude. I mean, he’s been highly suspicious from the activities we’ve seen in the last couple of episodes. He’s gone through with a series of actions that are highly suspect, and you’re going to find out that Andrew Campbell is not who he says he is.

She also talks about Ezra, stating:

In addition to the finale, King also revealed some details as to what you can expect from this summer’s episodes:

Our Summer season — which is only 10 episodes long — is all about closure. Telling the final 10 episodes of this story we started many, many seasons ago. It’s just sort of full steam ahead and answers, answers, answers. I mean we gave a lot of answers in our season four finale when Ali came back, but these are all the “A”-related questions. Some people have guessed the answers on multiple occasions, but all those answers will be revealed in the next 10 episodes. This is our chance to finally end this great and wonderful story. 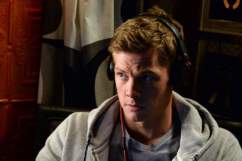