Chad Johnson was dubbed as the villain on the 2016 season of The Bachelorette from the first episode of the show and he only technically made it to the fourth episode. However, he wasn’t quite ready to leave the show and ended up on episode five as well. He butted heads with pretty much every contestant on the show and even got physical with a couple of them. Get the rundown on Johnson below, from his net worth to his revenge since the show ended filming.

Johnson works in luxury real estate and has made a successful career for himself with his net worth estimated at $800,000. His Realtor.com profile describes him as this:

Coming from a family of real estate investors, he knows all sides of the real estate game. He has been an entrepreneur since age 13, allowing him to hone his sales and negotiation skills to levels that of agents twice his age. Having also spent time as a successful investor, auto dealer, day trader, and website flipper, Chad has developed the ability to determine value with unprecedented accuracy. For those looking to either buy or sell properties, Chad Johnson will not disappoint.

One of the front-runners on The Bachelorette this season is contestant Robby Hayes and Hollywood Life reports that Johnson has been hanging out with one of Hayes’ exes. Hope Higginbotham and Johnson now appear to be an item, with Johnson posting this message on Instagram:

While traveling this weekend, our paths crossed and I finally had the opportunity to meet Hope Higginbotham in person. Let me just say, she is even more beautiful in person. A great girl like her deserves so much better than someone who lies, cheats, and ends a four year long relationship in order to pursue fame on a TV show. You’re amazing, I miss you already.

Do you think Hope and Chad Johnson are in it for the long haul or are just trying to get a rise out of Robby?

4. Johnson Has Finally Owned His Bad Behavior on the Show

One thing that people can always respect is when you own up to your own faults. Johnson posted the above photo of himself watching this season of The Bachelorette and wrote a caption about how he sees why people hate him on the show … Though he does say he thinks some of his antics were funny.

While many Bachelorette fans can’t help but blast Johnson on social media, there is definitely one guy out there who is a big fan. Spencer Pratt was the over-the-top villain on reality show The Hills, rising to fame for several years as one half of the couple known as “Speidi.” Watching The Bachelorette, Pratt has become a fan of Johnson, even calling him a “hero.” 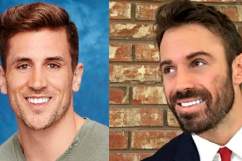 Chad Johnson Vs. Jordan Rodgers on ‘The Bachelorette’: 5 Fast Facts You Need to Know

Read More
Reality TV, The Bachelorette, TV
Chad Johnson says goodbye to The Bachelorette tonight in a volatile exit that's filled with fighting. Get the rundown on the realtor, his net worth and more.