Fans from around the globe have been anxiously, to put it mildly, anticipating the release of Eminem’s new album, Revival, and the drawn-out wait is finally and officially over.

The latest tracks vary from talking about everything from the lyrical master’s fright to impress his fans, to highly controversial raps about police brutality towards black people. Controversy? Eminem? You guessed it, and it’s brilliant.

Some of the album feature artists include Skylar Grey, Beyonce, Kehlani, Ed Sheerhan and Phresher.

Read on to find out how you can listen for free via iHeartRadio, Spotify and Amazon Music.

iHeartRadio published the following information on their blog regarding the release:

Get ready to ‘Lose Yourself,’ Eminem fans! Beginning at midnight tonight, we’re celebrating the release of the rapper’s new album with the launch of Eminem REVIVAL Radio, a custom station that will play songs from REVIVAL, mixed in with your favorites. And you better brush up on your rapping — this station will be live 24 hours a day!

In addition, the album is hitting our rhythmic stations across the country – the stations will play a new track off REVIVAL at the top of every hour starting at midnight. The album has a slew of features from superstars including Beyoncé, Ed Sheeran, P!nk, Alicia Keys and more. You won’t want to miss this!

Want to hear the album on repeat? iHeartRadio Plus and All Access users can binge REVIVAL on demand beginning tomorrow! Start counting down the hours and listen to iHeartRadio to get in the Eminem zone.

To get fans amped up about the premier, iHeartRadio has created a platform for users to listen for free. The radio guru created a “custom digital station that will play new songs from REVIVAL along with some of Eminem’s greatest hits.” The album is be available for “iHeartRadio All Access users.”

As if that wasn’t enough, iHeartRadio will be playing a new track from the mix “at the top of every hour.”

To listen for free, iHeartRadio users may simply hit the play button on the station icon above, or click here.

You may listen to the entire album for free via Spotify by clicking here.

In addition, if you’re an Amazon Music Unlimited customer, you can listen free, or if not you may purchase the album via the app by clicking here.

Fans of Slim Shady will have a chance to speak to the rapper himself at 5 p.m. ET:

Join us tomorrow live for the Shady Fireside Chat at 5pm ET live on @Shade45. Full details on the site. #REVIVAL https://t.co/hvT5Imwh0V pic.twitter.com/MfLhVfqs8y

One of the tracks from Revival, “Untouchable,” which you can listen to at the top of this article, was released early much to the delight of those who initially thought that the album’s launch date was set for November. The rap talks about the anguishing reality of police brutality among black people, and the history behind some of the facts surrounding the black community. A glimpse of the powerful lyrics, not in exact order of the song, state:

Black boy, black boy we don’t get your culture and we don’t care what our government’s done to f**k you over man….

Wait, why are there black neighborhoods? Cause America segregated us, designated us to an area

And education sucksand everyday’s another

Freddie Gray for us, a levy breaks or fuzz…

Much of the excitement leading up to the album can be attributed to the genius marketing behind it.

The first clue at the new record came off of the Instagram account of Paul Rosenberg, Eminem’s longtime manager. “Look what arrived at the Shady offices today!,” he wrote. 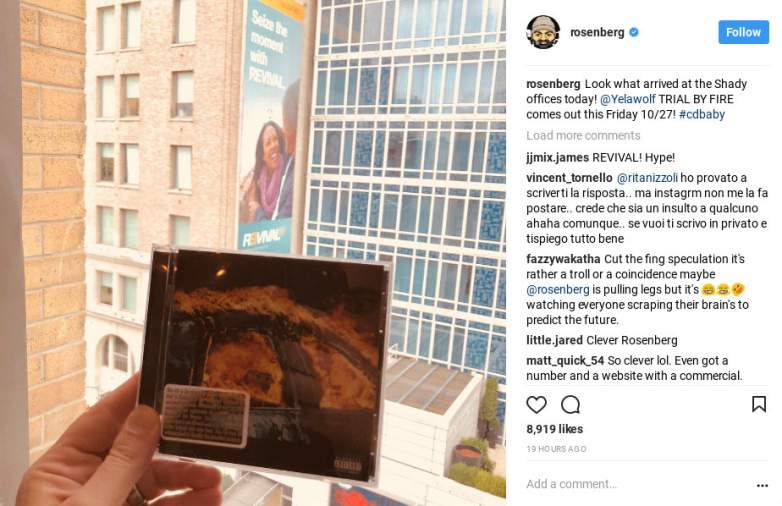 Although the photo doesn’t initially stand out, a closer look reveals a CD with the image of a burning car. The background features a “drug ad” that reads “Seize the moment with REVIVAL.” This detail goes along with a plethora of ads including a website created for the supposed drug, which is said to treat “Atrox Rithimus,” a condition that doesn’t exist anywhere else. A backwards E in the word Revival at the bottom of the ad coincides with the artist’s classic logo. Additionally, the star often refers to prescription pills in his rhymes.

And while at first glance the ads for the drug might come off as legit, it doesn’t take long to connect the verbiage with the legendary rapper.

When you click onto the website you’ll see the phrase “Seize the moment,” a lyric from one of Eminen’s famous tracks, “Sing for the Moment.”

Scroll a little further down and the site reads:

Shady’s promo is pretty clever for his new album dropping next month. I love finding Easter Eggs like this ? #Revival #Eminem pic.twitter.com/hJuKv8HrEn

“You should discuss the potential benefits and risks of REVIVAL with your doctor or clergyman,” reads “the most important information you should know about Revival.” “REVIVAL is a non-narcotic medication intended for daily use that can be taken with or without food.”

if the Eminem/Revival thing turns out to be real this is the best promo Shady done in YEARS!

All Eminem fans will want to call the working hotline listed for “Revival,” a hysterical experience with music from his award-winning tune, “I Need a Doctor,” playing in the background. When you call the number 833-243-8738, you’ll hear, in part:

And by the way Slim, I’m doing 115 words per minute on this laptop, dare me to drive? Hit me back Slim, just to chat. Truly yours, your biggest fan, this is Jen.