Fatima Ali is one of the contestants from season 15 Top Chef, but since filming the show, she has been dealing with an even bigger challenge. Ali has been battling cancer and has been documenting her journey on her Instagram profile. She has been dealing with her hair loss and has said online that she sometimes misses her locks. In one of her Instagram posts, she addressed her major hair change, writing this: “Embracing the new look as cancer treatment continues. I know a little piece of me has changed already and as each new challenge is conquered with the help of my family and friends, I can only hope to emerge even more resilient, honest and kind. #fuckcancer.” The night of the premiere for this season of the show, Ali was actually in the hospital and said that her nurses were being wonderful to her. She also wrote the following message on Instagram, “Feeling a bit lost because of the changes since filming but I’m determined to stay positive. #teamfati #bravo #chef #fuckcancer.”

According to Bravo, Ali was originally diagnosed with Ewing’s sarcoma, a type of bone and soft tissue cancer. As a result, she had to have surgery on her left should in order to remove a cancerous tumor. In February, Ali revealed that she was in her final rounds of chemo and that the tumor, along with surrounding cancer cells, had been totally removed. On February 12, 2018, she wrote on Instagram, “Had a long week of chemo that runs for 24 hours over 5 Days. My mind runs a mile a minute though my body feels sluggish and fatigued. Really looking forward to the routine of physiotherapy to get mobility back into my arm and get cooking. #bored #fuckcancer.” Ali is reportedly now cancer-free and is fighting her way back to normal life.

My nurses are the best!!! Trying to get me pumped up for the premier tonight of #Topchef. Feeling a bit lost because of the changes since filming but I’m determined to stay positive. #teamfati #bravo #chef #fuckcancer

Upon hearing the struggle Ali was going through, several of her Top Chef competitors visited her in the hospital and extended their best wishes. The two season 15 Top Chef finalists, Joseph Flamm and Adrienne Cheatham, shared their reactions recently with Bravo. Flamm, who is a good friend of Ali’s, told Bravo TV, “I called her and I remember talking to her and she told me. I remember just walking around the restaurant all day, just shaking my head. It was such a gut punch. I couldn’t believe it, that somebody so young and vibrant, it’s just like she’s amazing. So it was horrible.” Flamm then added, “She’s so positive, she’s so strong … Now feeling like she’s gonna come on the other side of this and absolutely fucking crush it.”

As for Cheatham, she told Bravo that, “It was really scary. The tumor had been growing for like over a year, so the whole time we were on the show, the whole time we’ve been focused on things that are less important than life, she’s been going through this and had no idea herself because she was enjoying her life so much and cooking and spending time with us in Colorado. And it puts everything into perspective, like as much as I wanted to win, as much as she wanted to win, as hard as we were all working, nothing is as important as your health and your life.” Cheatham and fellow Top Chef contestant Tyler Anderson are putting together an event at Tyler’s restaurant Millwrights in Simsbury, Connecticut and proceeds from the culinary event are to be donated to The Sarcoma Foundation of America in honor of Ali. 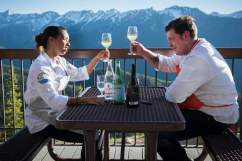