Tori Spelling is back for the 90210 reboot. The actress and TV personality is returning to the role that made her famous, and given her full circle journey, some fans are curious about her age, and how long she’s been in the public eye. According to Famous Birthdays, Spelling is 46 years old. She was born on May 16, 1973 in Los Angeles, California.

Spelling grew up under her father Aaron, who is the the most prolific television writer and producer in US television history. Because of her father’s profession, she was able to get into acting at an early age, and she made her screen debut on a 1981 episode of Vega$. Spelling continued to act on television throughout the decade, but her breakout role didn’t come until her father cast her on Beverly Hills, 90210 in 1990. She was 17 at the time, making her the youngest of the main cast.

Spelling appeared on all ten seasons of 90210, during which time she was nominated for two Young Artist Awards. According to her co-star Ian Ziering, she’s also the catalyst for the upcoming reboot season. “Tori, who, in the TV series, is a mother of six children and is broke, inspires everybody to get the show back on,” he told Us Weekly. “[Tori’s character] really needs this. So everyone has their reasons of why they don’t want to do it or why it shouldn’t be done, but Tori’s story is so compelling, it convinces everyone to do it.”

In a separate interview, Spelling told Entertainment Weekly that the reboot is an opportunity to appreciate things she took for granted the first time around. “We found out a lot. You perceive things totally different, too, when you’re in your 20s as opposed to your 40s,” she explained. “And I think it’s very rare in life that you’re able to go back and say, like, ‘Gosh I would have done things differently or handled this situation differently.’ But all of a sudden here we are!”

Last week of filming @bh90210 AND 8 more days till our premiere on @foxtv (Wednesday, August 7)! – Can’t wait to share with you all the fun we’ve been having being back together. For anyone who’s ever said “You can’t go home again” we are living proof that you can! I’ve had some of the best laughs, hugs, shared memories, great realizations, and feeling of life coming full circle this summer! I love all of my old family and all of the new family members we’ve welcomed. #ASummerToRemember #LetsDoItAgain #Memories #Love #Family #bh90210

“Just like with the photoshoot the other day, the promo shoot, we were doing a group shot together, and we did those every year for 10 years, and never thought we would go back,” Spelling added. “And it’s interesting, because when I was in the moment I never appreciated them, and then when I got older and I would tell my kids about it, I was like, ‘Awww….’ In my head, it’s a bummer — I wish I had appreciated every moment of that. And then here we are again, so it’s like a do-over.”

According to Healthy Celeb, Spelling is 5’6″. This makes her the tallest of her female 90210 co-stars, as Shannen Doherty is 5’3″ and Jenni Garth is 5’5″. She is shorter, however, than her male co-stars Jason Priestley and David Austen Green. 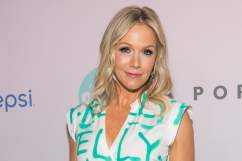 Read More
FOX, Tori Spelling
Tori Spelling is back for the '90210' reboot. Find out how old she is and how tall she is compared to her co-stars.