Erika Jayne has three words for those who think she needs to hire help to rehab her reputation amid her divorce and other legal drama involving ex-husband Tom Girardi’s embezzlement lawsuits.

One Twitter follower told Erika, “It’s not your money though.”

“Three words- where’s the money? Oh that’s right you spent it,” another chimed in.

Another follower told Erika she should hire crisis management and “Do the right thing, pay back the victims” in her ex’s lawsuit cases.

But other fans defended the “Pretty Mess” singer and showed her their support as she weathers her ongoing legal drama.

“Three words. You Got. This,” one fan wrote.

“There are only two words you should give them and its f*** off,” another told the Bravo star.

On the Sept. 15 episode of “The Real Housewives of Beverly Hills,” two of Erika Jayne’s co-stars and their husbands were seen making fun of her situation during a dinner party at Kyle Richards’ house.

Dorit Kemsley’s husband, P.K. Kemsley,  pointed to the suggestive photos and captions that Erika posts on Instagram as her ex stands accused of stealing settlement money from widows, orphans, and cancer patients.

Kemsley said Erika’s sexy photos were  “bad moves” and he suggested that her only chance for “the comeback of comebacks” is to break herself from the “shackles” of the world she used to live in with Girardi. Kyle Richards’ husband Mauricio Umansky agreed with Kemsley.

During the scene, several of Erika’s most controversial social media posts popped up on the screen.  The 50-year-old reality star has also been slammed for recently posing for a sexy pic while wearing pricey Christian Louboutin shoes. 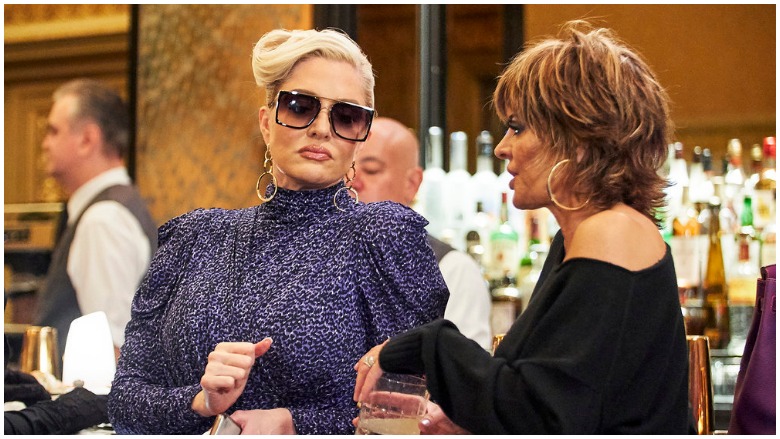 The “Real Housewives” husbands aren’t the only ones who think Erika should hire someone to handle her image. On the most recent episode of “Watch What Happens Live,” Lisa Rinna showed support for Erika and said critics should let Girardi’s trial “play out” before judging her friend, who has yet to be charged of any crimes. But when asked by Andy Cohen for her thoughts on Erika’s social media posts, Rinna admitted she has approached her about it.

“I had suggested to Erika that she hire a crisis management firm to deal with this,” Rinna said. “And that was early on and that was something she wasn’t interested in doing. So I think I stated how I felt early on and I think that’s all you can do.”

As for her critics, Erika Jayne shared  a meme on Twitter that showed her  in a “RHOBH” confessional with the caption, ”Go be offended at your own life.”