Marcus Mariota returned to the Titans last week, and led his team to an upset win over New Orleans. (Getty)

Carolina hopes to continue their franchise-best start when they visit the Titans this Sunday.

The game will be broadcast on FOX at 1 p.m. ET in certain areas. To see which game will be shown in your area, click here.

TV Channel: The game will be broadcast on FOX in certain regions, with Thom Brennaman and Charles Davis on the call. Click here to check and see if you’re within the game’s coverage area.

Game Preview: The Titans may be 2-6, but the record doesn’t tell the full story. The key is Marcus Mariota, who returned to the lineup last week after missing two games with a knee injury. Mariota threw for 371 yards and four touchdowns last week against the Saints, becoming the first rookie in NFL history with two 4 TD/0 INT games in his rookie season.

The Panthers may be undefeated this season, but they’ve been far from perfect. They are one of the worst teams on third down this season, and are not statistically dominant in any offensive category. But the Panthers are opportunistic. They have an NFL-best 13 interceptions, and their defense is fourth in the league with 25 sacks. 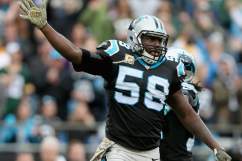