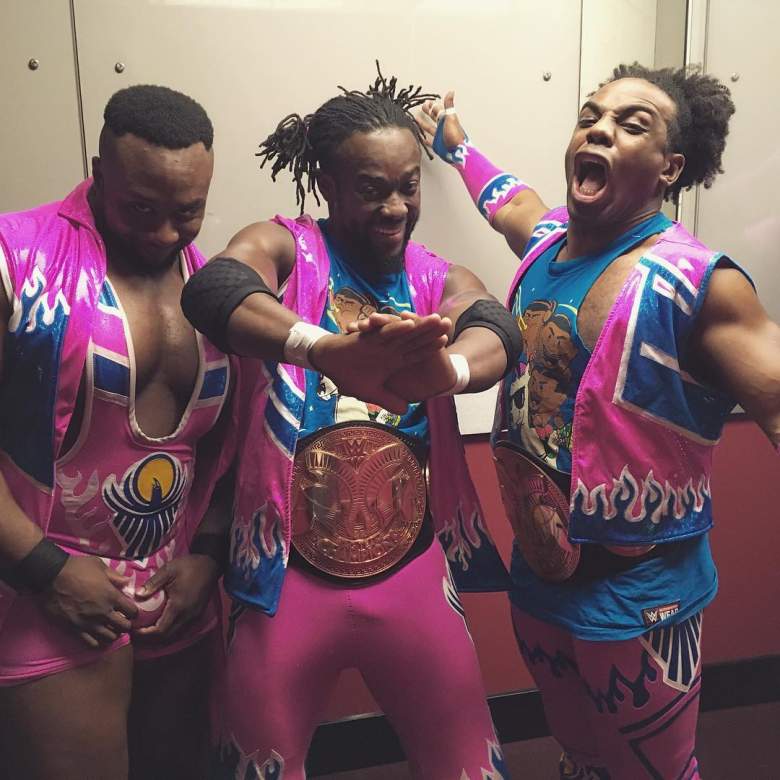 The New Day are set to defend their Tag Team title against Chris Jericho and AJ Styles tonight on RAW. (Instagram)

We’re just a few weeks away from WrestleMania and things are only going to get more dramatic in the WWE, particularly when it comes to the McMahon family.

Read on for the lowdown on how things went down from Chicago:

Shane McMahon opened up RAW on Monday night and responded to his father’s proclamation from last week that he intended to write him out of his will. Shane describes what his plans are when he defeats The Undertaker and takes over RAW before the bells toll and the lights go off.

The Undertaker! Nope. Vince McMahon walks out. Everyone boos.

Vince shows off a picture of him with a young Shane before he took him to his first-ever WWE match and then proceeds to stomp it into the ground. He sticks security on Shane, who tells them that he’ll go quietly if they don’t touch him. They do.

Shane beats down and he makes his exit from the ring.

The  WWE Intercontinental Champion was taken down several times by Neville who got to the top to hit his Shooting Star Press late in the match. Then he added a Red Arrow, but Owens was able to kick out and eventually roll out for the win.

After the match, however, things got exciting. Sami Zayn returned. And battled Owens for several minutes before sending the champ out of the ring holding his belt.

Brie Bella Gets Beat Up By Everyone

After a preview f this week’s Total Divas episode, Brie Bella and Summer Rae are in the ring and going at it. Brie gets a few good kicks in, but Summer takes advantage of a distraction when Lana’s music hit to roll up for the win.

Once Brie is down, Lana comes into the ring and absolutely lets loose on Brie. She kicks Brie, drops her the facebuster and, well, she walks away.

Everyone is still vaguely confused by Lana and what her problem is with Brie.

Winner: The League of Nations

Well, it was never really going to be even.

Ziggler tried. He really did. He battled with two-counts several times and actually eliminated King Barrett midway through the match. He threw Rusev over the top of the ropes. But then Sheamus happened.

Sheamus attacked with the Brogue Kick and while Ziggler was able to duck it, it helped set up Rusev for a kick to the head that was enough to help seal the victory. Sheamus wrapped it up with another Brogue Kick. Naturally.

The tandem that doesn’t make sense continues to work as Banks and Lynch found a way to take down Team B.A.D.

Lynch started things off with Tamina before getting double teamed and fighting to get Banks in to the ring. It goes back and forth between Banks and Naomi for a few minutes, but Banks is able to hit the Backstabber and the Banks Statement for the win.

Charlotte, naturally, appears after the match and attacks Banks. She jumps on top of Banks and slams her head into the mat. Lynch tries her best to intervene, but is suplexed for her efforts.

When you have Big E on your side, things get a little bit easier. Seriously. Watch that move again. He lifts Chris Jericho up like he doesn’t weight anything.

The New Day are still on top after taking down Y2AJ and a lot of it has to do with Big E’s performance in the ring. Styles tried. He was flying everywhere, but Kofi was able to take him out and that left Jericho to battle Big E.

As has been a theme tonight, though, the post-match action is the most interesting. This went down shortly after The New Day victory:

We’d say that partnership is over.

The WWE United States Champion wasn’t in danger of losing his title, but Kalisto added another impressive performance to his recent resume, defeating Breeze.

It wasn’t anything crazy. There wasn’t much drama. But it’s another win and Kalisto is still being, deservedly, hyped up.

Despite some dancing and seriously impressive tomahawk-ing by the Social Outcasts, Axel wasn’t able to hold on in the ring and Ryback notched the Shellshocked for the win.

He didn’t linger long to celebrate his victory either. As soon as the bell sounded, Ryback marched out of the ring and that was that.

It’s the match we never knew we wanted.

Back and forth to start before Wyatt started to grab some momentum and beat Ambrose around the ring, getting him to an eventual headlock and starting to taunt him.

Then Ambrose lost his mind.

He starts trading shots with Wyatt and while he couldn’t wrap up on Dirty Deeds he is able to block Sister Abigail and bounce back after being, literally, thrown into the barrier. Ambrose connected on a big-time clothesline and goes to the top to drop an elbow drop.

Shane McMahon, whose return to the ring sent shockwaves through the wrestling community, is slated to return tonight as RAW tapes live from Allstate Arena in Chicago. Of course, last week McMahon’s inheritance was left up in the air after his father declared that he plans to write Shane out of his will and give all of it to Stephanie. Oh, and he plans to renounced Shane as a son.

So, yeah, just a bit of drama.

McMahon hasn’t been wasting any time getting ready for his match with The Undertaker. Check it out:

Being put through the paces by my strength and condition coach
Jim Quinn. #masochist pic.twitter.com/xUpSvHaLdh

The dark main event for the night, which was advertised by the arena, is Ambrose, Jericho and Ziggler vs. Wyatt, Owens and Sheamus.

Expect some big things from Ambrose once again tonight as he continues to defy Triple H and The Authority. After all, last week’s final moments on RAW saw Triple H agree to a title match, which will happen at Roadblock this weekend. There will be trash talk. Lots of it.

There’s also a confirmed match on the slate tonight. The WWE Tag Team Champions The New Day will face off against Chris Jericho and AJ Styles in a title tilt. The rivalry between The New Day and Jericho has been going for months now and the addition of Styles has added a bit of fresh emotion to the storyline.

We’ve also got a few near-future-spoilers to dish out.

According to WrestlingInc. WWE Hall of Famer Mick Foley is scheduled to return to RAW for a WrestleMania angle, but isn’t slated to appear in Chciago tonight. Foley isn’t expected to wrestle, but will appear on RAW to help set up a match he has a non-wrestling role in.

And, lastly, but maybe most importantly. John Cena may be heading back to the ring sooner rather than later. He posted this on Monday morning:

Very exciting week this week. Honored to be part of some VERY BIG news!

Of course, the hope is still that Cena will be able to get back into the ring at WrestleMania, but he may appear on a RAW to update his status sooner rather than later.

AJ Styles’ Family: The Pictures You Need to See

Read More
WWE, WWE Raw
Shane McMahon is heading back to RAW tonight and there's even more drama on the road to WrestleMania. We've got all the spoilers and results right here.