Peter Cech could be ready to return to the lineup today for Arsenal, but is it too little too late? Arsenal trail Leicester by 11 points heading into the final months of the BPL season, but the Gunners are only now getting healthy. They may have a game in hand on the Foxes, but Wenger’s men will need a miracle run to climb back into the title race. That would have to start today against Watford, who knocked Arsenal out of the FA Cup earlier this year.

The win was monumental for the Hornets, who face Crystal Palace in the FA Cup semifinals in three weeks. Quique Sanchez Flores has kept his team safely above the relegation zone, but Watford have done little else this year, collecting only eight points from league play in 2016.

Cech has missed five games with a leg injury, and could be ready to send David Ospina back to the bench. Fellow injured Gunners Jack Wilshere and Thomas Rosicky have also returned to training with the first-team, but the two midfielders will likely need another week before entering game action. 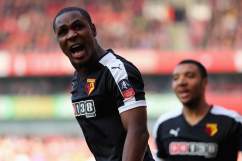 Arsenal vs. Watford Live Stream: How to Watch Online