Two weeks ago, we would never be talking about a must-win game for Barcelona, but that might be today when they take on Atletico Madrid in the second leg of Champions League quarterfinal action. Barca have taken just one point from three matches in La Liga, and now must also battle Atletico in the title race. Despite their 39-game unbeaten run, Barca are just three points ahead of Atleti in the Spanish table, and are ahead by just one goal headed into today’s second leg.

Injury problems have contributed to Barcelona winning just once in their last four outings. Barca are without three starting defenders, and Gerard Pique is playing through injury. Fortunately for Los Blaugranes, Fernando Torres will be suspended for today’s match after his red card at Camp Nou. Atletico will still pose a formidable threat, as both teams look to join Liga mates Real Madrid in the UCL semifinal. 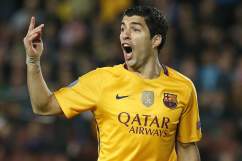 Atletico Madrid vs. Barcelona Live Stream: How to Watch Online