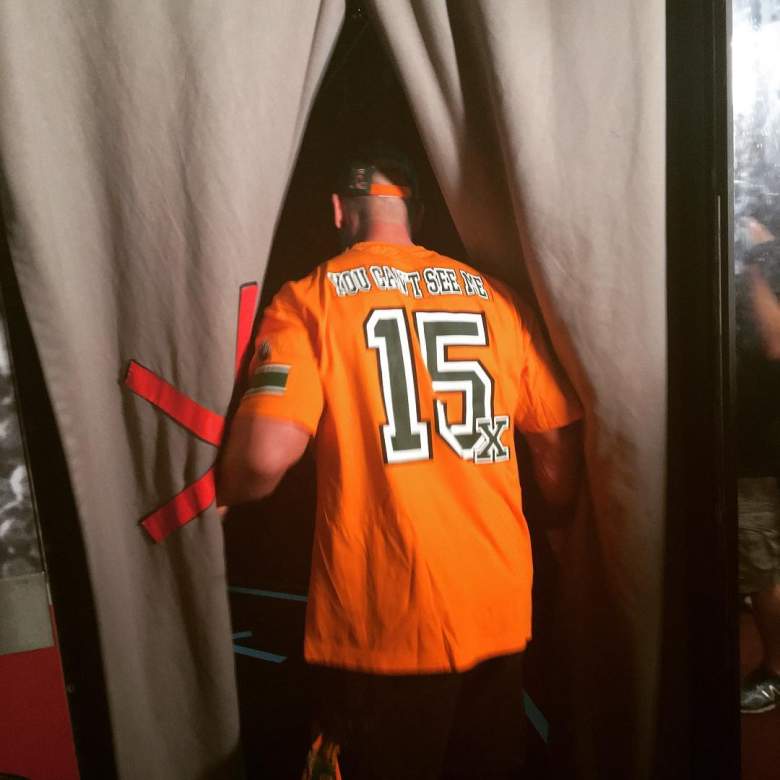 Will John Cena make an appearance at tonight’s RAW after returning to the ring at WrestleMania? (Instagram)

Have we all recovered from Sunday night’s WrestleMania 32? No? That’s ok, neither have we.

But the WWE won’t wait for us to completely recover before throwing a brand-new RAW our way on Monday night and we’ve got the complete breakdown on all of the matches and biggest highlights. Also, this started the show:

"Just to prove my point … Alright, let's see what the hell you've got!" – @VinceMcMahon.

Let’s get to the point real quick, The New Day won. As we expected. It was after the match that things got interesting.

Apologies, @WadeBarret, but apparently YOU ARE the weakest link. #Raw https://t.co/gawx4RnFuu

The League of Nations kicked out King Barrett. Seriously. They, literally, kicked him out of the ring. But was it premature? As soon as Barrett rolled under the rope, the lights went down and The Wyatt Family entered the ring.

And then The Wyatt Family absolutely beat down.

This wasn’t really all that exciting, honestly. Summer Rae appeared in the ring, started talking trash and The Boss answered by absolutely dominating here.

Welcome to RAW, Apollo Crews. The WWE NXT Superstar took control early on and it wasn’t long until it was obvious that Tyler Breeze was no match. Crews looked good in the ring. He threw Breeze around like he weighed nothing and his victory was pretty clear from the get-go.

It was a good debut.

Well, that wasn’t a very long reign for Ryder.

After clinching the WWE Intercontinental Title at WrestleMania on Sunday, Ryder was challenged to a quick title defense by The Miz and it was all about deception for the challenger. Check it out:

Thanks to his wife’s help, The Miz was able to notch the pin and, more importantly, the belt. Do we smell a brand-new feud? Seems like it.

Tables Match: The Usos vs. The Dudley Boyz

They brought the tables back!

This feud doesn’t seem to be going anywhere and it got a bit of a boost after an early bell infuriated The Dudleyz in this match.

Sami Zayn was supposed to be in this match, but after he was ambushed by Kevin Owens earlier in the night, he was left on the outside looking in and Cesaro surprised everyone by replacing him.

Seriously, check out this crowd reaction:

It was a solid back-and forth match to start, but in the end it really became just about Jericho against everybody else. Cesaro fought well for awhile, but Styles simply would not give up.

He came back and then came back again and, in the end, he defeated Jericho on a pin, securing a matchup against Roman Reigns for the WWE Heavyweight title.

Let’s recap what went down at AT&T Stadium. Roman Reigns took back the WWE World Heavyweight Championship, defeating Triple H and spearing Stephanie McMahon along the way. Triple H followed up by tweeting this:

Charlotte retained her title as well, while Zack Ryder stole the Intercontinental Title and The League of Nations, finally, defeated The New Day for the WWE Tag Team Title. After everything that happened on Sunday, it’s easy to be pretty darn hyped for tonight’s WWE Raw, which is taping from the American Airlines Center in Dallas, Texas. The WWE even released a special preview video for tonight’s event, check it out:

There are also some rumors regarding a few unannounced appearances and more than a fair share of speculation that John Cena will return to RAW last night after his surprise appearance at WrestleMania.

This one is going to be fun. Make sure to check back here throughout the broadcast for all the latest updates and highlights on the matches. RAW airs at 8 p.m. ET on USA.

Read More
WWE, WWE Raw
The events of WrestleMania are less than 24 hours old, so things are still going to be pretty fresh in everyone's minds once RAW starts tonight. We've got all the spoilers here.