The impossible dream is almost a reality.

Given odds of 5000-1 at the start of the season, Leicester City are on the cusp of an incredible title run. If they want to seal their mark in soccer history, they’ll need three points from their final three matches. The Foxes, who are unbeaten in nine straight matches, will look to clinch the trophy today at Old Trafford, even without striker Jamie Vardy up front.

Vardy will have to watch from the sidelines, after receiving an extra one-match ban for improper conduct stemming from his early dismissal against West Ham. Vardy, who would cross the 3,000 minute threshold for the season against United, is third in BPL with 22 goals. Expect Leonardo Ulloa to replace Vardy in the lineup.

United, who have won six straight at home, aren’t in the business of giving away Premier League titles. The team that has won more than any other club need a strong performance to stay in top-four contention. For all their scoring woes this year United’s defense has been great at home; they’ve surrendered just seven league goals in 17 home fixtures this season. 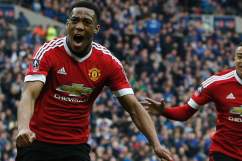