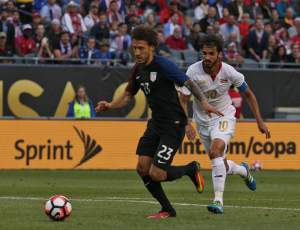 The United States will look to advance to the next round. (Getty)

The United States have an opportunity to advance to the next stage of the Copa America tournament. Whether they do depends on their performance against Paraguay.

Paraguay needs a win to have any chance of making it into the knockout stage while the United States has a good chance of advancing with a tie.

The United States enters the match with three points after their 4-0 win over Costa Rica. Paraguay has just one point, but put up an impressive performance in a losing effort against Colombia.

Ultimately, we expect the United States to pick up the win in the match. With the viable option of a draw on the table, expect a low scoring affair in this match.

Heavy’s Pick: United States 1 Paraguay 0. Under on the point total.