Derrius Guice is one of the top running backs in the country.

BYU takes on LSU in one of the major neutral contests of the opening weekend of college football. According to OddsShark, LSU is favored by 14.5 points, and the over-under is set at 47.5 points.

The game was originally scheduled to be played in Houston, but the contest was moved to New Orleans as Houston recovers from Hurricane Harvey. This may seem like a small detail, but New Orleans gives the Tigers a sizable home field advantage.

That said, the OddsShark computer is picking BYU to upset LSU. The computer projects a BYU 36.4-34.2 victory over LSU.

BYU has Tanner Mangum back behind center, but Magnum does not have many weapons to work with. We are not as bullish as the computer on the Cougars.

BYU was one of the few teams that played last weekend, but their outing did not do much to instill confidence in their chances of upsetting LSU. BYU found themselves in a battle with Portland State. The score was 14-6 for most of the game until BYU added two fourth quarter field goals to make it 20-6.

What’s to like about LSU? Everything starts with running back Derrius Guice who played behind Leonard Fournette last season. Guice has been banged up, but is expected to play in tonight’s game.

Tigers fans hope for a more dynamic offense with Ed Orgeron coming off a full off-season as head coach. Danny Etling will be back behind center, and wide receiver D.J. Chark is due for a breakout season. The Tigers also rely on a solid defense with a number of playmakers..

In what is essentially an extra home game for LSU, look for the Tigers to roll BYU in the Superdome. 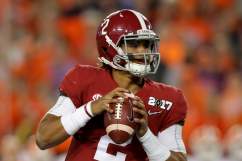