The Cowboys and Broncos square off this afternoon.

The Dallas Cowboys go on the road to take on the Denver Broncos. Kickoff is at 4:25 p.m. Eastern on Fox. The game will be shown in most areas nationally, but click here for the coverage map to find out if your local Fox station will carry the game.

Line: Cowboys by 2.5 (Line is according to OddsShark and subject to change.)

Game Preview: The Broncos host the Cowboys in a unique cross-conference contest. The matchup to watch is the Cowboys offense against the Broncos defense. Denver’s defense is anchored by Von Miller who hopes to get to Dak Prescott.

After an off-season full of suspensions, Dallas is riding the good news (at least for now) of Ezekiel Elliott’s continued availability. The Cowboys leaned on him often against a solid Giants defense. Elliott and the Cowboys will face a tougher test this week against the Broncos defense.

Prescott looked good in the opener as he helped the Cowboys offense control the tempo of the game. For the Broncos, Trevor Siemian held his own against the Chargers on Monday night. Denver has a crowded backfield with multiple running backs including C.J. Anderson and Jamaal Charles.

Dallas enters the matchup as a slight favorite. Part of the challenge for the Broncos is the lack of explosiveness on offense. Siemian has good receiving options in Demaryius Thomas and Emmanuel Sanders, but has not been able to put up a lot of points since taking over the reigns last season. Denver does not want to get into a shootout, and is hoping for a low-scoring affair.

After today’s game, the Cowboys continue playing outside the division with two straight matchups against NFC West opponents (Cardinals and Rams). Next week, the Broncos go on the road to take on the Bills. 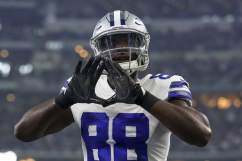