Maroon 5 singer and The Voice judge Adam Levine is engaged to Behati Prinsloo. Apparently Levine popped the question to the leggy 24-year-old girl over the weekend and she accepted. They’ve only been dating a year, but that’s all it took for Levine to know she’s the one for him. Check out our 5 Fast Facts to see why Levine is so head over heels for this hottie.

1. The Girl is a Well-Versed Model

Behati Prinsloo is a stunner who’s a money-making model all over the world. She’s walked the runways for Milan, Paris, and New York Fashion Week for designers including but not limited to Carolina Herrera, Gianni Versace, Donna Karan, Marc Jacobs, Ralph Lauren, Zac Posen, and Vera Wang. She’s extremely talented as a catwalk champ.

No wonder she caught the eye of sexy Adam Levine.

2. Behati Has a Secret Named Victoria

Even as hot as Adam Levine is, Prinsloo’s runway shots are killer, so the jury’s out on who the true winner in this relationship is with this sexy couple.

3. Actor Scott Caan Saved Her From a Stalker

Okay, so maybe this was just on an episode of Hawaii Five-O. But, it did happen! Behati Prinsloo guest-starred and Caan came to the rescue.

Or maybe it was Minnie … Either way, the girl likes to be silly and goof around more than any model we’ve ever seen. And, she looks hot when she does it.

Yes, we’re serious. This is really her.

Well, if Adam wants a girl who can make him laugh, he’s got her!

With a body like hers, it’s no wonder that Behati Prinsloo is usually found in a bikini on the beach. She titles herself as a beach rat and loves catching rays, surfing, and bummin’ out on the beach. 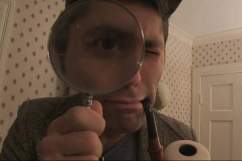 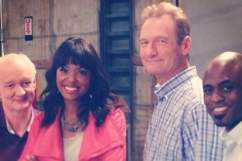 Whose Line is it Anyway Returns: Top 10 Highlights