In the season two premiere of Graceland, FBI Agent Mike Warren returns to the Graceland house after the Caza cartel puts a hit out on his undercover identity, Mike the Marine. Back on the West Coast, Mike finds something is different about his former training officer Paul Briggs and rest of his federal agent family.

Here’s what you need to know about the premiere episode, “The Line.”

1. Mike Returns to Graceland as Bait for Caza Cartel

All seems normal in Southern California, as Briggs cruises down the highway with the music turned up. He pulls into a small dock and meets his fisherman pal Leon. Briggs has brought him a couple nice Red Snapper, oh, and a small collection of military assault weapons for good measure. But this isn’t the old Briggs, who played both sides of the law. He’s got his FBI teammates Johnny Tuturro and Charlie DeMarco backing his play with the fisherman/arms dealer.

Scoping out Leon’s boat, Briggs notices a picture of his friend and former trainee Mike sitting on the counter. Turns out the Caza cartel, whose business Mike hurt with the takedown of Bello and death of their leader Jangles, has put a hit out on the young FBI agent.

Briggs makes a quick phone call to his buddy, who’s back east working in FBI headquarters. He wants to set Mike up as bait for the Caza cartel so they can arrest their members for attempted murder. Mike, whose boss just called off his operation on contraband smuggling busses, tells him he’s game and takes the next flight out to the West Coast. Don’t forget to tell your new girlfriend Jess you’re leaving, Mikey!

Mike walks back into the Graceland house and sees something that definitely wouldn’t fly when he lived there: guns out downstairs. Not sure Johnny, Dale “DJ” Jakes and Paige Arkin’s use of the guns technically violates that house rule though.

The three federal agents are involved in a crazy competition created by the new guy, Wayne Zelanski, where they have to disassemble their handguns, then place their heads on the butt of a rifle and spin around 10 times, and finally return to the table to reassemble their handguns. The winner is Jakes, who doesn’t stop when the other two and Charlie stop to welcome Mike back.

The guns downstairs aren’t the only surprise. After Jakes celebrates his victory, he comes over and gives Mike a huge bear hug, something the old, OJ labeling, U.S. Customs agent never would have done. The scene is also missing house leader Briggs, who hasn’t been in much of a party mood lately.

Briggs has backed off on the drinking (and presumably the heroin), and started up a real relationship with roommate Charlie. His new found “happy place” with the tough but gorgeous agent hasn’t stopped the nightmares about FBI Agent Juan Badillo, who he accidentally killed last year after he mistook him for Jangles. Charlie asks him about the haunting dreams, but Briggs tells her that he doesn’t remember them.

He best keep the truth to himself, because his girlfriend is secretly checking up on Badillo’s widow and daughter. I guess she still has her suspicions about the man she’s now sharing a bed with.

RT if you like seeing Briggs and Charlie together. Sleeping with the enemy? #GracelandTV

Also keeping secrets is Jakes, who is looking for an apartment to share with his son. Has his ex finally come around on letting her boy have a relationship with his real father?

4. Mike Gets Kidnapped, but It’s Not the Caza Cartel

Briggs takes Mike to see Leon, so the fisherman can confirm the whereabouts of “Mikey the Marine” and call it in to the Caza cartel. Leon decides last minute he doesn’t want to share the finder’s fee with Briggs, and pulls out a gun. Not a smart idea for the small-time arms dealer, who Johnny takes down with a tight shot to Leon’s firing hand. Briggs gets Leon’s Caza contact from his phone to set up his own meet, but the Caza boys say they will dictate the time and place.

Briggs wants full control, and tells Mike he’s dropping the op. Mike isn’t happy and accuses the team of becoming a bunch of drunk burnouts just playing cops and robbers. Later that night, Paige finds her former lover sulking on the beach. He tells her that when he arrived in D.C., they looked at like a rockstar, but he burned through all that clout when his bus theory didn’t pan out. He wants that feeling again.

"This world has enough dead rock stars." Mike better watch his back. #GracelandTV

Don’t count Briggs out yet. The Caza cartel calls him back and sets up a meet. Only thing is, they don’t show up on time. Next thing Mike and Briggs see is a patrol car pulling up to check on the warehouse nearby with a bunch of dogs barking inside. The cops find an illegal dog fight in progress, and in the mayhem of people rushing out, Mike gets snatched.

In another warehouse down the road, the two kidnappers make Mike strip down to his skivvies and drive off to an abandoned house. Briggs and Johnny do their best to track Mike down, but the kidnappers have a five minute head start and a different car.

Using a crude but effective interrogation technique, Mike’s captors throw a plastic bag over his head. They keep asking him if he knows “the line.” Mike doesn’t understand until one of them specifies the request to “the bus line.” Slipping away from oxygen deprivation, Briggs comes in firing and takes out both the kidnappers.

"Out of the way. We're family." -Charlie #GracelandTV

Charlie and Paige rush in later to check on Mike, and Charlie notices the fresh ink on the two dead guys. They are new recruits, and Briggs knows Caza would never send in newbies for this type of interrogation. Mike connects the dots and realizes they kidnapped to ask him what they knew about their bus smuggling operation. His theory was right!

Mike wants to restart his bus operation, but he’s going to need a team and an operating budget. He calls in a favor to his girlfriend Jess and she hooks him up. He gets the money he needs, but he won’t need to go far to find his team — it’s his Graceland family. He’s excited, but when he tells them about working on his eight-week operation, they’re less than thrilled about working for the rookie. 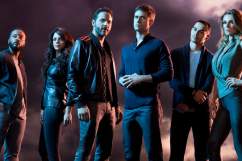 Read More
Graceland, Spoilers, TV
In the season 2 premiere of Graceland, FBI Agent Mike Warren returns to Graceland for a special undercover mission after a cartel puts a hit on him. Mike finds that Paul Briggs and the rest of the team have changed since he left for D.C.