Bruce Jenner is now Caitlyn Jenner. The Olympic champion turned reality TV star is on the cover of next month’s Vanity Fair magazine, and in an in-depth magazine, she opened up about her new identity as a woman.

1. She Is On the Cover of Vanity Fair

Gracing the cover of Vanity Fair, Jenner came clean in the exposé about what she had and hadn’t had done in her transition to womanhood—which she states had begun as early as the 1980s with hormone therapy to help develop breasts. During this time she also began to crossdress, opting to wear panty hose and bras underneath her suits at celebrity functions. She was married to her first wife, Chrystie, at this time, and decided to stop her transition for fear of what people may say about it to her children. Chrystie was privy to Caitlyn’s gender dysphoria, along with his second wife Linda.

Caitlyn also touches on the fact that upon meeting Kardashian matriarch Kris, she informed her of her gender dysphoria before marrying her, too.

The 22-page article was written by Buzz Bissinger and features photos from the iconic Annie Liebovitz.

Jenner told Bissinger, “If I was lying on my deathbed and I had kept this secret and never ever did anything about it, I would be lying there saying, ‘You just blew your entire life. You never dealt with yourself,’ and I don’t want that to happen.”

Jenner has had her laryngeal prominence, or Adam’s apple, removed along with a facial feminization surgery and breast augmentation. She has not had genital reassignment surgery and has not said publicly if she plans to. 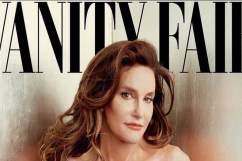 Did Caitlyn Jenner Have Sex Change Surgery? No.

2. She Will Have Her Own Reality Show

Along with the cover of Vanity Fair, Jenner released the above video of the photoshoot process. She claims that Bruce had secrets, but Caitlyn doesn’t have anything to hide. In the article about her, Vanity Fair writes:

Bruce Jenner… was “always telling lies.” Caitlyn Jenner, she said, “doesn’t have any lies.” … Caitlyn Jenner has the possibility to make it right and close the fissure as much as she can. “I have high hopes that Caitlyn is a better person than Bruce.”

It appears that Jenner will have the opportunity to show how good Caitlyn is, as last month, she began shooting a docu-series for E! that will premiere this summer.

Jenner’s four children from her two marriages prior to marrying Kris Karadashian will not be taking part in the show. Her two daughters with Kardashian, and her step-children will be.

They support her transition, but are concerned that the show will be exploitative and similar to Keeping Up With the Kardashians, according to the Vanity Fair article.

I'm so happy after such a long struggle to be living my true self. Welcome to the world Caitlyn. Can't wait for you to get to know her/me.

Her Twitter account became the fastest ever to reach 1 million followers, surpassing the recent record set by President Barack Obama.

4. She’ll Be Honored With the Arthur Ashe Courage Award at the ESPYs

Jenner will be honored with the Arthur Ashe Courage Award July 15 at the ESPYs, where she’ll be joined by all 10 of her children and stepchildren, according to the Vanity Fair article.

5. The Family Hasn’t Publicly Commented Yet

Jenner’s four children with his first wives are protective of Caitlyn and aren’t happy with her choice of producers for her upcoming docu-series. They feel that their relationship with Caitlyn is still fragile and that having some of the exploitative producers responsible for the success of Keeping Up With The Kardashians might be damaging to what they have built.

Jenner has admitted that he made a lot of mistakes raising his four children with Chrystie and Linda.

There has been no response from the Kardashians or her children with Kris, Kylie and Kendall Jenner.