Garret Yrigoyen took home the first impression rose and first kiss with Becca Kufrin on The Bachelorette 2018. Over the course of the season, Yrigoyen has become a front-runner, but this isn’t the only time that Yrigoyen has chased love. In fact, he was previously married to a woman named Kayla Cunningham and the two tied the knot at Newcastle Wedding Gardens in California. Unfortunately for Yrigoyen, it was a short-lived marriage, as OKHereIsTheSituation has reported that the ex-couple’s wedding was on September 19, 2015 and the divorce was finalized on March 25, 2016. According to Yrigoyen, he and his ex-wife split after just two months of marriage. See their wedding video highlights below, by Jensen Films.

For Yrigoyen’s vows to Cunningham, he said, “Kayla, I hope you know that I love you with every ounce of my being and you realize your importance to me and how lucky I am to have you in my life.” Yrigoyen also joked about their watching reality TV together … We wonder if they were fans of The Bachelorette … In reciting his vows, Yrigoyen fought back tears and Cunningham attempted to console him my rubbing his arm.

The wedding was a bit rustic themed and the couple used the hashtag #YrigoyenWedding2015 for posted photos. In the wedding video, it appears that Cunningham’s mother was the one to walk her down the aisle, as Yrigoyen smiled and shook back tears. And, instead of walking back down the aisle as husband and wife, Yrigoyen carried his bride on their way. They then were taken away by golf cart.

Garrett Yrigoyen’s divorce papers stated that both Cunningham and Yrigoyen said they were incompatible in marriage, could no longer live together as husband and wife, and that there was no chance of reconciliation. According to Reddit, there was a registry still up for the ex-couple on The Knot, but it was now been taken down.

On The Bachelorette this season, Yrigoyen said he was in love once after college and that she loved adventure as much as he did. He said that he and his ex were together for a year and a half before getting engaged. He also said they were engaged for a year before tying the knot. Yrigoyen said he married the wrong person and that Cunningham drove a wedge between himself and his family, as well as his friends. He said he wanted to fight for the marriage to work out, but said his ex was emotionally abusive.

When talking about her reaction to Yrigoyen’s marital confession, Becca Kufrin revealed to People, “That night Garrett opened up about his past relationship and being married for a short time. At first this information scared me a little and I questioned if Garrett was ready for another relationship. If he wasn’t, would he be able to be vocal enough to tell me if he saw any red flags in ours? Once we talked it through, I understood his loyalty and felt like he really did do his best to fight for his love. I understood where he was coming from — his past relationship resembled what Arie and I had. I didn’t want to put a divorce against him because we all have a history.” 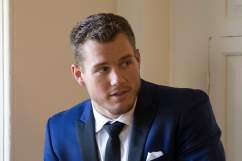 ‘The Bachelorette’ Contestant Colton Underwood Is a Virgin

Read More
Reality TV, The Bachelorette, TV
Watch the wedding video for Garrett Yrigoyen from The Bachelorette and his ex-wife Kayla Cunningham, plus get the details on their divorce.