Carrie Underwood did not undergo plastic surgery after she fell and cut her face open in the fall. Back in November, the country music star fell on the front steps of her home while taking her dogs out, injuring her wrist and suffering a laceration to her face that required upwards of 40 stitches.

Underwood took some time away from posting selfies on social media, but is now feeling comfortable enough to resume posting. Each time she posts, however, fans seem to scrutinize the photo, many letting Underwood know that she looks great and that her scar is barely even noticeable.

For months, fans have speculated about Underwood’s face, many wondering if she had plastic surgery. This week, however, Underwood opened up about her fall and admitted that she didn’t go under the knife to put her face back together, so to speak. Her face healed naturally, and she has been left with a small scar.

“I’m on some magazine every other week for something crazy. It’s a little sad, because the truth is just as interesting. I wish I’d gotten some awesome plastic surgery to make this [scar] look better. But I try not to worry too much about it. My mom will be like, ‘Did you see they are saying this about you?’ And I’ll be like, ‘Mama, I don’t care. I’m just trying to raise my son and live my life,'” Underwood told Redbook Magazine.

#FBF to the set of the #CryPretty music video!! ? http://smarturl.it/CryPrettyVideo

Underwood admits that she sees herself differently in the mirror, but that she doesn’t look differently to other people.

“Any time someone gets injured, it looks pretty bad in the beginning, and you’re like, ‘What is this going to wind up like?’ You just don’t know. It was also a perception thing, because I look at myself [now] and I see it quite a bit, but other people are like, ‘I wouldn’t have even noticed.’ Nobody else looks at you as much as you think they do. Nobody notices as much as you think they will, so that’s been nice to learn,” she told Redbook. 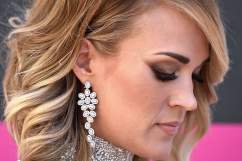