For American Idol fans out there, the 2019 season may be over, but the show has been renewed, so any fears of it being canceled can be pushed aside. Next season would be season 18 but, because the show is technically a reboot, some refer to it as season 3. Whatever the case, the premiere date has not been revealed but TV Line has reported that it will be in January 2020.

As for the three judges, the show has reportedly made offers to all three judges – Katy Perry, Luke Bryan and Lionel Richie. In addition, veteran host, Ryan Seacrest, is in the middle of a long-term deal with ABC.

According to Taste of Country, judge Luke Bryan said that he’s optimistic all three judges, including himself, will return to Idol. Bryan said, “Love that a third season is on the way. All things feel positive that me and Lionel and Katy will be back. We’re doing the business of the business … When Ryan Seacrest sends you a text message going, ‘Thank you for really making this brand … a great brand’ it’s something that we’re proud of. It’s something I enjoy doing. It’s something that I work hard at.”

Win Country also reported that Bryan joked that when it comes to his contract with Idol, “They have agreed to pay me $180 million … We like that number … it’s in the ballpark … But, no … I’m obviously excited about the potential of a season three. We’re in the business portion of it where we’re working [the contract] out — I pray to God that me and Lionel and Katie are the ones that can come back.” He continued, “I could not be prouder of what we have put on TV…” he asserts. “I can tangibly hold my head high … It’s something that I enjoy doing. It’s something that I work hard at … My learning curve from last year to this year — I just got a lot better … Now I hop in a cab and a lot of people don’t know now my music … they just know me from American Idol.” 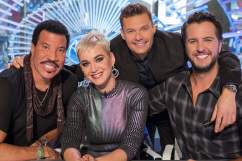 Bryan also joked that he wants to make more money than his buddy Blake Shelton, who is a judge on The Voice. And so, Bryan joked, “I always like to find out what Blake (Blake Shelton) is making on The Voice and just do it $1 more than him. I gotta go play a Blake thing at the end of the month. I’m gonna get him all liquored up and he’s gonna tell me his salary and then I can come back and tell Idol what I want.”

Currently, The Voice is entering its finale week as well, with judges Shelton, Adam Levine, Kelly Clarkson and John Legend heading into the finals. Levine no longer has any contestants left in the competition and Shelton is dominating the finalists with his team members. So, there’s a good chance that Shelton could take the win this season. As for next season, which is season 17, all four judges are reported to be returning. Shelton and Levine have been coaches on the show since the start of the series. Meanwhile, this was Clarkson’s third season and Legend’s first.