Confessions of a Dangerous Mind will be made available on a number of different streaming platforms at 9 p.m. PST on Thursday, May 9 or midnight EST on Friday, May 10, depending on your time zone. We’ve listed the different platforms that the album will be released on, and the ways in which you can listen to them below.

Confessions of a Dangerous Mind. The album. Available everywhere Friday.

You will be able to stream Logic’s album on iTunes and Apple Music. If you have an Apple Music account, you can go into the app on your phone or tablet and set the notifications to alert you when the album is out. Click here to learn how.

Based on the standard release schedule for Spotify, Confessions of a Dangerous Mind will also be available to stream. If you don’t have a Spotify account, you can sign up for one here and pay only $0.99 for the first three months.

Confessions of a Dangerous Mind will also be available to listen to on Tidal. The streaming service offers a free 30-day trial with Tidal Premium, which provides  access to music videos and curated playlists.

Logic has been teasing Confessions of a Dangerous Mind since the beginning of 2019. He told Hollywood Life that the album will be a return to his usual sound after the rock excursion that was Supermarket. He also said that the album will be an ode to the digital age that we currently live in. “Fans can expect references to social media, that is a big thing,” he revealed. “Because I think social media is amazing. I think it is awesome and I wouldn’t be here without social media but at the same time, it can be a negative place man.”

“It’s a place where people want to say hurtful things whether you’re famous or not or this and that and bully you…and it has even made me sad,” he continued. “Imagine thousands of people are talking trash about you right now. That is kind of a sad thing. So, I talk about where we are and where we are headed and where hopefully we can end up as far as peace goes, and dealing with that,” he says, before adding: “there is some dope ass raps on there too!”

Logic released the tracklist for the album on May 9, which includes guest verses from the likes of Wiz Khalifa, G-Eazy, Will Smith, and Eminem. The latter delivers a speedy flow on the album’s lead single, “Homicide.” Logic has spoken about Eminem’s influence on his music in the past, and considers him to be one of his rap heroes. During a recent interview, Logic said that he freaked out when he heard Eminem’s shout out on the track “Fall.”

“Of course I was ecstatic when I head [the] ‘Fall’ shout out. Of course I was excited,” he said. “It was awesome. It was amazing to be recognized by one of my favorite MCs of all time. All my friends were like ‘bro’ and then I was like ‘damn.’ and I was in the studio like ‘shout out f*cking Slim Shady’ that’s crazy, man. So I f*ck with him. I’m down I want to work with him. I want to do a song with him.” 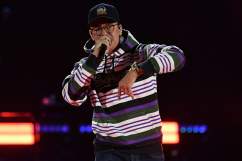 What Time Will Logic’s ‘Confessions of a Dangerous Mind’ Be Released?