Getty Kanye West worried fans after tweeting about the possibility of being murdered.

Kanye West alarmed fans over a tweet he wrote citing the possibility of getting murdered. “NORTHY I AM GOING TO WAR AND PUTTING MY LIFE ON THE LINE AND IF I AM MURDERED DON’T EVER LET WHITE MEDIA TELL YOU I WASNT A GOOD MAN… WHEN PEOPLE THREATEN TO TAKE YOU OUT OF MY LIFE JUST KNOW I LOVE YOU,” the rapper tweeted in the early afternoon on Friday, September 18. West attached a photo of daughter North to the tweet.

Shortly after posting the tweet, the presidential candidate deleted it without further acknowledging it. A few hours later, West continued tweeting about his fight to get musicians the right to own their music. He even vowed to help longtime foe Taylor Swift own her music from Scooter Braun. One of West’s tweets even hinted that Swift and West have reconciled their past feuds. “Love you Paul can I get a retweet love you Drake Kendrick even Taylor,” he wrote.

I’M GOING TO PERSONALLY SEE TO IT THAT TAYLOR SWIFT GETS HER MASTERS BACK. SCOOTER IS A CLOSE FAMILY FRIEND

West Was Temporarily Suspended From Twitter for His Latest Spree, a Friend Says 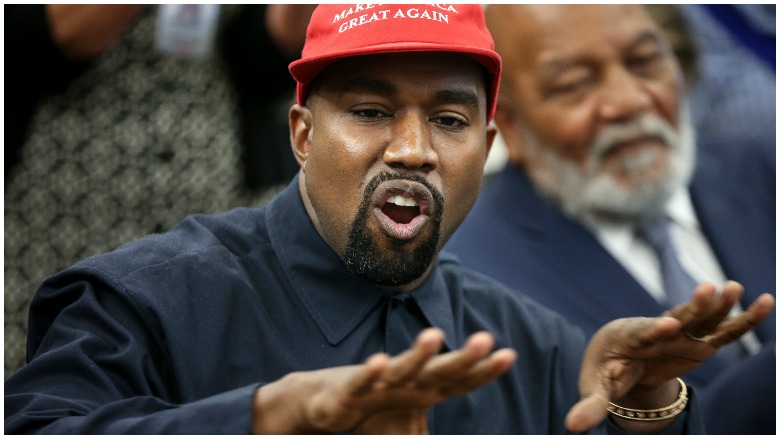 GettyKanye West speaks during a meeting with U.S. President Donald Trump at the White House in 2018.

West – who struggles with bipolar disorder – has tweeted various unsupported claims and accusations since Monday, September 14. On September 14, he accused Sony and Universal of slavery while also calling himself the “New Moses.” He tweeted, “I need to see everybody’s contracts at Universal and Sony. I’m not gonna watch my people be enslaved. I’m putting my life on the line for my people. The music industry and the NBA are modern day slave ships. I’m the new Moses.” West also posted over 100 screenshots of various contracts with Universal later in the week.

Two days later – on September 16 – he tweeted a video of what appears to be him urinating on a Grammy Award thrown into the toilet. He posted the 8-second video with the caption, “Trust me … I WONT STOP.” Just a few minutes later, West slammed Forbes editor Randall Lane. He released contact information for Lane after calling him a “white supremacist.” The tweet – which has since been removed by Twitter with the disclaimer, “This Tweet violated the Twitter rules” – read, “If any of my fans want to call a white supremacist … this is the editor of Forbes.” West attached a screenshot of a contact in his phone listed as “Randall Forbes,” including the phone number.

The rapper remained quiet for the next few hours, but it’s unsure if that was his own decision. Rick Fox – a former NBA player – tweeted that Kanye West had informed him Twitter removed the rapper from the platform for 12 hours. Fox tweeted, “My friend @kanyewest wants you all to know that he was kicked off of @Twitter for 12 hours.” Fox has yet to follow up the claim.

The rapper’s latest concerning tweet was addressed North West – his oldest child with Kim Kardashian. Kardashian has yet to publicly discuss her husband’s latest Twitter spree. But a source told People that the reality star “feels powerless” as West continues tweeting unsubstantiated accusations.

The source said Kardashian has been struggling with her husband’s latest series of tweets. “He’s off his meds,” the source claimed to People. “He promised he’d stay on them. The last time, part of his negotiation with Kim was that he’d get back on his medication and he would work very hard to control his impulses. He made a lot of promises. And now those promises are broken, less than a month later.”

Kardashian still wants to protect her children. Kardashian and West have four kids together: North, 7, Saint, 4, Chicago, 2, and Psalm, 16 months. “It’s the same thing over and over and over again,” the source told People. “He’s on very thin ice with her right now, and she’s truly trying to decide what to do to protect the kids, but also her own sanity. The whole thing is discouraging and difficult for her.”

The source also claimed that Kardashian had no idea that West was going on another Twitter spree. “She saw the tweets and was like, ‘Seriously? Again?’” the source told People. “She wants to be a supportive partner, she’s doing everything she can do to support him. But he has to support himself. He has to take care of his own health. She can’t force feed him medication. She can’t make him do anything he doesn’t want to do.”

READ NEXT: How Does Kim Kardashian Feel About Kanye West’s Latest Twitter Spree?

Loading more stories
wpDiscuz
0
0
Would love your thoughts, please comment.x
()
x
| Reply
Kanye West alarmed fans over a tweet warning he could be murdered on Friday, September 18. West attached a photo of daughter North to the tweet.