“Broadway Joe” Namath wore a mink coat akin to Macklemore to the Super Bowl coin toss and the Internet exploded.
Check out some of the best tweets and images to arrive from his insane attire.

And the best winter wear of the night goes to Broadway Joe: http://t.co/tqzcgaO22S #SuperBowl http://t.co/X4iIU4ULGw

I blame #JoeNamath 's jacket for the safety. #PeytonManning is still trying to figure out what kind of animal that was! 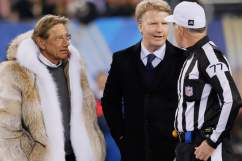